UPDATE 9/9/20: Long my contention: know your friends, know your enemy. Two articles, one topic: Lincoln’s Gates of Hell speech from 1838, warning us of the onset of the lawless mob and the inevitable dissolution of our social order. One writer warns us with some evidence of the evil forces against which Trump is waging war on our free republic’s behalf.   A leftwing scribe declares that HE (DJT) is the satanic avatar of lawlessness and social dissolution. Here are the Orwellian tactics of projection laid bare: accuse your enemy of that of which you yourself are guilty.

UPDATE 9/7/20: The same as 3 years ago, only more so: which Party makes outrageous accusations and demands of the other Party that that they can’t explain away in themselves? Fascism (their favorite, all-purpose projection)? Racism?  Anti-Semitism?  Domestic terrorism?  Political and financial collusion with foreign enemy powers?  Income inequality? Concern for the Little Guy while maintaining permanent poverty and despair, pushing the heroin of government dependency thereby “owning” those Little Guys? 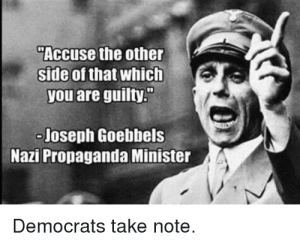 ORIGINAL POST 6/18/17: Just asking:  in all fairness, are we out of line to we call the Left’s recent “Incitement To Violence” an “Excitement For Violence?”

In the wake of a deranged Sanders supporter trying to assassinate a Republican Congressman and others at a softball practice, it seems particularly apt to hold a mirror up to the execrable late night comedians, NY Shakespeare-In-The-Park producers, Trump-loathing celebrities, mainstream spokesmen bolstered by a complicit MSM and their audiences of tens of millions and ask, “Who are the haters? Who are the fascists? Who’s shutting down free speech? Who’s obstructing the American electoral and ongoing political process? Who’s threatening and acting out violence? Who are acting like Nazis?”

With Trump derangement now at epidemic levels, one is obliged on a daily basis to wage an effective political war of words. We millions of Deplorables must brace ourselves and turn the tables on this abuse from friends and relatives and strangers who still think it’s unfair and “treasonous” for Leftists and Progressives to lose elections.

Offensive means On the Offense, not defense. And if accused of being “offensive,” simply ask “Would you be offended to look at yourself?”

Then hold up  a little pocket mirror while tersely reciting a few undeniable Progressive pots and kettles: How do you account for  virtually every squalid Inner City being Democratically run over the past 50 years? Why do rich Liberal celebrities have walled estates and armed security details while raising their shrill righteous voices for gun control and open borders for ‘the rest of us? Why, in the absence of Christian and Jewish and Buddhist and Hindu or any other kind of organized, serial violence worldwide do you deny that international terrorism is an Islamic problem, not one of “religion?”

A modest proposal to each put-upon, frustrated Deplorable: the most effective defensive weapon is, metaphorically speaking, a mirror to be calmly pointed outward at the first hint of hostility from those who blindly hate us. Both literally and figuratively, holding “as ’twere the mirror up to” the true nature & threatening madness of the “Resistance” is all that civilized people have for weapons…that and making the law work on our side.  Ultimately, this battle will be won (or lost) in the courts (or default absence of them). Get used to the idea that we are engaged in a civil war, albeit a cold one.