UPDATE 7/30/17: The latest “Oh, wait, you mean DEM collusion, corruption & treason!” moment: Debbie “Scary Hair” WassHerName Schultz” and her preying pack of Pakistani pals. Is it any wonder they’ve been sending up accusatory smoke bombs once the Clintons were no longer around to provide high-level cover for the whole stinking Dem swamp?

Since most modern Leftists live and die by the religious premise that their ideas are  Biblical scripture, beyond reproach or criticism, it may seem a waste of good oxygen to inform them otherwise. But inform them we must. Sooner or later, facts must replace fantasy. Telling the truth must override deliberate lies in the public forum.

In response to the High Hypocrisy of the Trump-hating Left on the subject of Russian electoral collusion, we respond: Kennedy. The Clintons. Obama. Shall we go on? 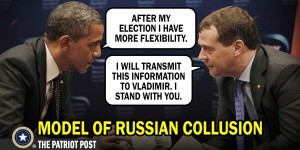 Yes, let’s do. Hold up that mirror.

In an effort to thwart Ronald Reagan’s 1984 re-election, Senator Edward Kennedy approached the highest levels of the Soviet regime in the Kremlin to collude with American media elite in portraying Reagan as a dangerous madman and warmonger.   Chappaquiddick Teddy, the youngest, most spoiled and possibly the most corrupt of the original Kennedys was said to be  “impressed” with then head Soviet Yuri Andropov, the murderous KGB automaton who, among other atrocities, hatched the plot to kill Pope John Paul in 1981. Shocking? Response from the Left: nothing to see here. Move on. 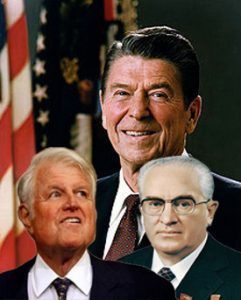 During Bill Clinton’s re-election campaign in 1996, serious money was found to be illegally funneling into his campaign from the the Far East, thus becoming known as ChinaGate. Small potatoes compared to the hundreds of millions that poured into the Clinton Foundation coffers prior to November, 2016. Interesting how that raging river of pledges, speaking fees and “charitable contributions” much of it  from overseas (including Russia) went suddenly bone dry once Bill Clinton’s wife was deemed a has-been by the American electorate. And that uranium deal. Shocking? Response from the Left: nothing to see here. Move on. 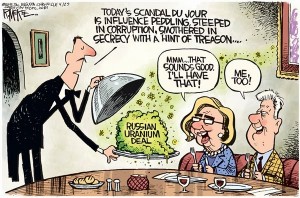 And let us not forget Barack’s excellent forays into electoral collusion, most prominent among them trying to thwart the much-loathed Bibi Netanyahu’s re-election in Israel. And how about that hot mic interchange and paddycake between the POTUS and  (wait for it!!) Russian  President Medvedev?  Shocking? Response from the Left: nothing to see here. Move on. 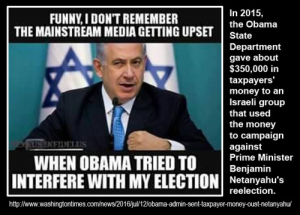 You want collusion with Russia? We’ll give you Collusion With Russia.

Please produce the comparable evidence of the Trump campaign and administration’s genuine, active, gainful “collusion.” Thus far, the ravenous MSM has produced ZERO except perhaps an “alleged” eyewitness’ testimony that one of Ivanka’s  mini-skirted aides may have consumed a shot of imported vodka at an office party last year. As even the Bezos-owned, Trump-loathing Washington Post has sighed, “This is getting weird.”

What say, Dems? Shall we set the historical record straight once and for all and stop colluding with (not to mention BEING) the enemies of real progress? 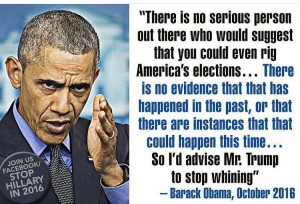 3 Replies to “Holding up the mirror to
Dem Collusion:
Kennedy, Clinton, Obama.”