The hapless wife of former President Bill Clinton desperate to get herself elected POTUS  has recently demonstrated classic “projection” in calling those daring to vote against her ‘“irredeemable,” part of a “basket of deplorables.”

Hold on, hold on, you ain’t heard nothin’ yet: “…the racist, sexist, homophobic, xenophobic, Islamaphobic — you name it.”  Phew!

Audibly enhancing this exhilarating on-camera hari-kari is the raucous enjoyment of a Hollywood basket of [presumed] adorables and Champions of Income Equality, each worth at least 20, 30, 50, 100 million bucks.  Who else is rich, mindless and decadent enough to pay $50,000 a head to listen to this as a warm-up act for Barbra Streisand? That’s a lotta money to watch this crumbling creature insult roughly half the voting population of America. True, she said only half of Trump supporters have no teeth, never bathe, shoot their dogs rather than bothering with vets and hate everyone indiscriminately; but….why only half? What’s the difference between those “deplorables” and  the other half who have the nerve not to like her?

The decidedly unfunny aspect of all this is the undisguised contempt in which Bill Clinton’s Enabler holds her political opponents. Once in full power, what’s to stop this Lady Macbeth/Mme. Mao from eliminating all annoying dissent from her sight via the IRS and her own bureaucracy of enforcers? She really, really doesn’t like us. Is it paranoid to be worried when someone is really out to get us?

To prove that even deplorable “Deliverance” extras like us are actually forgiving and “redeemable,” even compassionate under even such a barrage of negativity, we take great pleasure in gifting the Democratic Party’s unhinged Harpy-in-Chief with the complete works of Dale Carnegie. 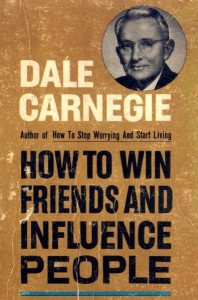 8 Replies to “Bad Seed Rhoda Rodham officially decrees half of America “not America.”
P.S. That’s the half that would never vote for her.”