UPDATE 7/2/18: Vying mightily for the deepest reaches of the septic tank, so-called “comedienne” Michelle Wolf goes yet deeper. And the general American public who vote get yet a better sense of today’s Democratic Party. One only wishes beloved genius clowns like Lucille Ball, Carol Burnett, Bea Lillie, even Joan Rivers could weigh in on what’s become of mainstream comedy.

UPDATE 4/2/18: Vile redhead and tasteless pig Kathy G. on the comeback trail likens herself to history’s heroic Enemies Of The People, a regulah victim of the First Amendment denied. It can happen here!!! As it should, meaning there are bounds beyond which even some of her Lib pals are uncomfortable. And now she’s selling out Carnegie hall, back in the pink…and the money. What a country!

UPDATE 10/24/17: As membership in the new, updated 4H Club (Harvey’s Hateful Hollywood Hypocrites) goes off the chart, one opines that Barry Fitzgerald would have a thing or two to say about one little red-headed colleen getting her Irish up about her former friends Lisa Bloom and Anderson Cooper. The former she calls a fame whore, the latter “a spineless heiress.” Didn’t homophobic talk like that go out with words like “faggot?” Not nice, Kathy, but it’s such fun to watch you and your deranged friends on the Left devour each other.

For the first time ever, nasty ginger nerd Kathy Griffin has evoked a laugh from these quarters. According to this mercifully unemployed and unemployable sage, the world has lost a role model. We’re told that with her inspirational career now in free fall, ambitious little girls cannot freely grow up to be “comediennes” like Kathy, making a graphic joke of decapitating a politician they don’t like. Truly, an incalculable loss to little girls of the world. 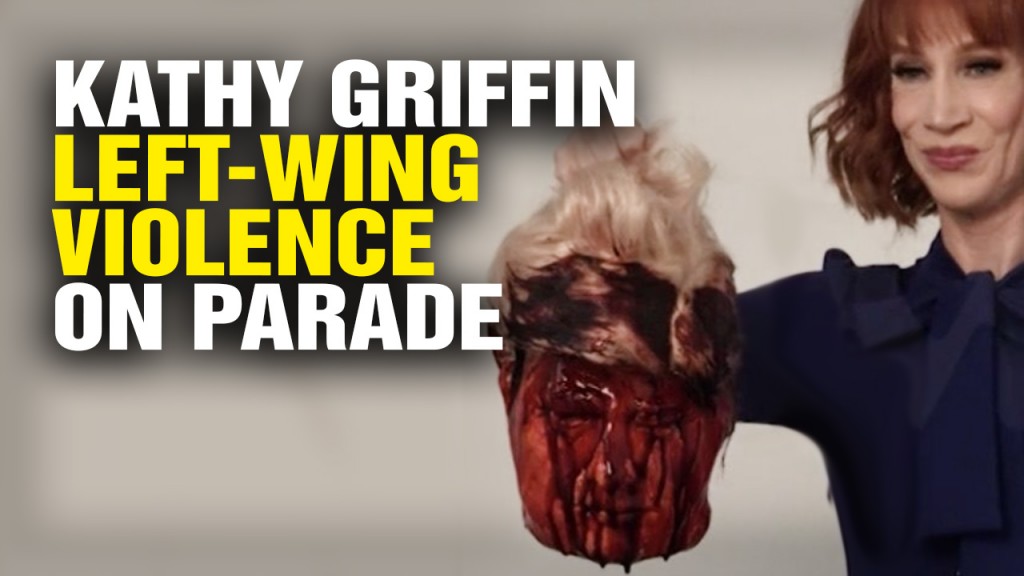 Another down side as reported by today’s pathetic answer to Lucille Ball and Beatrice Lillie: a chill has come over the land, free speech is dead, “never…in the history of this great country,” according to this consummate Leftist loon, has anyone been so cruelly persecuted for…well…making a joke out of beheading the President of the United States. Didn’t this sort of side-splitting humor go out with the French Revolution?

Like Meryl Streep comparing an unflattering tweet from The Donald to a Hitlerian “brownshirt” cudgel, so her Sistah-in-Resistance Kathy, suffering some serious economic consequences for her actions, carries on (piranha lawyer at her side) like a weepy St. Joan-at- the-stake, a victim of White Men…or whomever. Actually White Men AND Women, since both the President and the First Lady have had the gall to respond to her vileness with…(God save us !)…critical, accurate words. The First Couple have called her, respectively, “sick,” and “simply wrong and makes you wonder about the mental health of the person who did it.” How dare they! Positively tyrannical!

Today’s twisted Left in an Orwellian word: victim. Never the perp when actually so. So long as there are no consequences to their actions, no lie, insult, character assassination, threat is off-limits for them. With the help of their corrupt lawyers, any means to their noble ends. Such is the blood-lusting mind-set of any fanatic zealotry, and the Progressive “Resistance” to Trump’s election is nothing if not a hateful religious crusade, now on steroids since the electoral deposition of Hillary and Barack’s “transformative” legacy with her.

Something is turning for the better in the land when Liberal stalwarts like CNN, Al Franken and Anderson Cooper distance themselves from the ravings of philosophical comrades like Griffin, Colbert and Maher. Can it be a coincidence that this very week HBO has made the malevolent Maher walk back a “house nigga” joke? Perhaps the supreme arrogance of the Left has finally hit some sort of wall. The usual celebrated suspects with the unlimited power of the media at their disposal  will never give up. But it’s possible that restraint, boundaries, decency and fair play in our culture are at least making their presences felt…and pushing back.

2 Replies to “Sick (as in ill/dying) Comedy II: The Left on life support.”