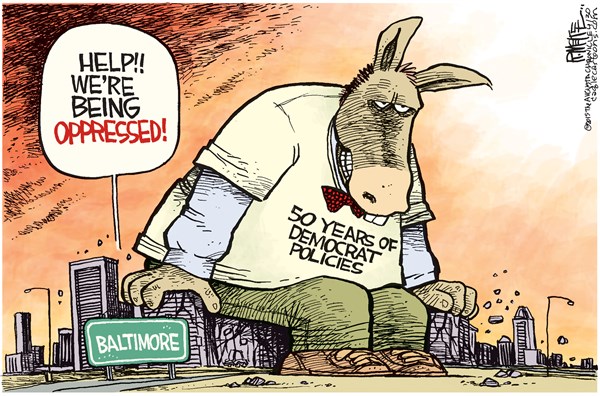 Hardcore Democrats, particularly those of the well-off chattering classes, will continue to thwart every move from the Trump administration or anyone determined to replace the BigGov Welfare mentality with the irrefutably positive can-do principles of free market capitalism: self-reliance, self-determination, the drive of the individual for self-improvement. It’s encouraging that there are some in the Liberal camp who sincerely wish to see an end to the obvious devastation of Democratic urban policies and welcome the efforts of Trump and his HUD Secretary, Ben Carson.

The challenge faced dates back 50 years to LBJ’s Great Society, dropped magnanimously like a well intentioned anvil on Blacks freshly liberated by the landmark Civil Rights Act of 1964. Instead of opening the doors to a great society of Constitutionally protected freedom to rise as talent and effort allowed like any other race, creed or color, Inner City Blacks were cynically bribed to become dependent wards of a patronizing Great Society, correctly calculated to be a permanent bloc of Democratic votes.

Further enslavement has taken root courtesy of Saul Alinsky’s cold-hearted Community Organizers (Obama and Bill Clinton’s wife among the most prominent) following the Piven-Cloward blueprint for exploding the Welfare rolls beyond any sustainability. The long range goal of this happy plan would be riots, a bankrupt treasury and the anarchy requiring the martial law “stability” of a dictatorship or at the very least a One Party America. At the moment said plan is on hold.

Thanks to our forefathers’ foresight in establishing the Electoral College, giving voice to the millions of us outside the walls of the Inner City slave enclaves, we have (for the time being) turned back the Devil. But never ones to give up, Hillary plots and plans her comeback while Obama holes up in that toney DC fortress (or mysteriously in Tahiti) with his sinister cohorts, determined to undermine any genuine progress that will rightly relegate him to history’s garbage dump.

It’s a given that freedom and progress always has its enemies. It also has its friends and allies; and our republic (and its suffering Inner Cities) is currently most fortunate to be led by a refreshingly unflappable brand of warrior, a force not to be underestimated.