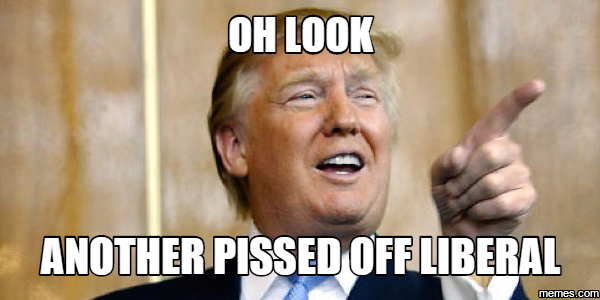 Most of us these days have the unpleasant task of fielding insults, slander, threats, snubs, social ostracism from our Lib friends terrified at the loss of the absolutely corruptive power they’ve enjoyed vicariously through this or that anointed Big Brother/Sister. For 8 years it’s been Beloved Barack. Now they are faced with Something Other, and they’re not one bit happy about it. Behold gun control fanatics unabashedly, publicly posting or announcing to fellow church congregants their wish to shoot the new POTUS. Lacking all imagination (and honesty), Trump’s victory is likened to the rise of Hitler and the Holocaust that followed.

If there is anything to be learned it is that they should be allowed to go as far around the bend as possible to publicly discredit and expose themselves. One must accept that reality and reason, even the actual improvement of economic and social conditions, will not move these people. Their immutable religion is a totalitarian vision of One World Without Borders, presumably ruled over by a very few superior Brains, most likely from the Ivy League…like a Barack or a Hillary. Although we are not permitted to discuss these things in the presence of our Lib/Left friends & relatives & colleagues, we are (much to their distress) free to support and communicate with one another. Exercising our rights of free speech and association is the thing the Left fears the most, the real dreaded Vast Rightwing Conspiracy that has now brought Hillary’s Kids to tears.

Below are two separate overlapping notes recently sent to fellow Conservatives, both trying to make sense of what has happened. Defining the absolute differences and distinctions between US and THEM is balm to this soul. In these quarters, there is absolutely no taste for “those things that unite us”…except the freedom for them to go their way and me to go mine.

It’s an interesting time. I think most of us are living with insanity of various degrees from our Lib friends. Too bad for them. They’ve had their 8 years to demonstrate the sterling virtues of Obamaesque Progressivism and Perfect Equality (except for those like Himself more equal than others). Now we get to try Freedom. One thing we have to face is that the more successful Trump is-a revived free market economy, job security for new millions, terrorists & criminals on the run-the more our Lefty friends will panic. Without permanent crisis and misery, the Left has lost its raison d’être.  Tolerating their senseless noise and threats is simply one of the inevitable inconveniences of freedom.

All of us Deplorables nationwide are experiencing this [threats, baseless accusations & vitriol reported by the correspondent] every day from our Lib friends. Truly madness and rage on a scale rarely seen before. My sense is that it’s all about those on the Left projecting their own mania onto us: absolute top-down control, master-planning, social engineering. The old equality vs. freedom thing. We want to live and let live, be left alone to go about our business and have the politicians restricted to keeping the way clear for us, not be our Mafia “protectors” and masters. The Left think the purpose of politics and politicians is to confiscate our money and play us all like puppets “for the greater good.”

The insane, threatening reaction to Hillary’s rout is pure terror of facing the world as free individuals and allowing others to do the same. They can only huddle and howl from the safe cover of the mob. For them, freedom must be sacrificed for their dream of  Perfect, Planned, Enforced Equality.

Donald can create millions of jobs, drive the Islamic (or whichever) barbarians back to their holes, and  the Disappointed Hillaryites will still be shrieking about “tax breaks for the wealthy” and “inequality.” Freedom matters little to them compared with the mythical fantasy of “guaranteed equality,”  “Open Borders!”, “One World!”

This razor-sharp rift currently reaching into everyone’s lives is Obama’s true legacy. The good thing is that it has dramatized the eternal choice Americans will always have: living as slaves in equality or as free people in inequality. Obama’s tenure was just the latest Lefty stab at tyrannical “equality.” Now we have a chance to try freedom again.

Yours in life, liberty and the pursuit of happiness,