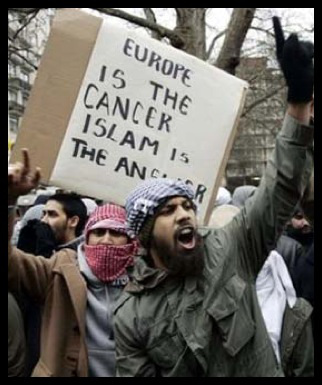 Belgium: land of moules frites, chocolate, 1000 beers, Bruges and Islamic terror. They-Muslims/Islamics/ Mohammedans-come to the West by the millions, soak the treasuries with full permission of their apologists; and, in return, proceed to kill us infidels in any variety of colorful, bloody ways.

Saith Boston pundit Howie Carr: “Lenin said the capitalists would sell the Soviets the rope to hang them with. Now the West is paying welfare to the ‘migrants’ who are using it to buy the bombs to blow us up with. But don’t you dare complain, or you’ll be shunned in polite society…”

Yes, we’re supposed to be tolerant and not tar all those “moderate, nice” Muslims with the same brush. Fine. To those Muslims sincerely wishing to assimilate and respect our way of life, we are patiently waiting suitable outrage and a show of real force against your so-called “few bad apples.”  Are you with them or against them?