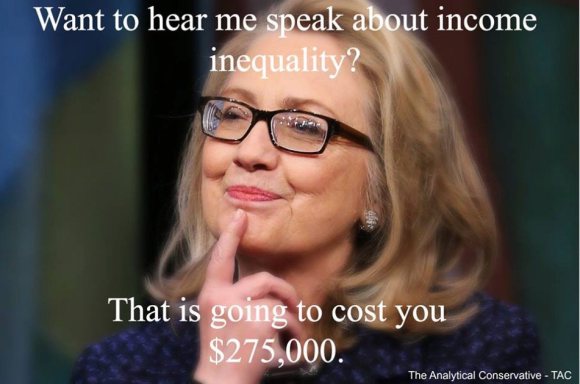 What better example exists of Leftism’s basic fraudulence than the Clintons? And their “charitable” Foundation? Actual deeds and consequences matter not. Appearances and false perception are everything. How is it that this pair of greedy, high-living, high-spending, insatiable power-mongering Elitists are given one huge pass on their routine two-handed grabs? Because..they care. Or so we’re repeatedly told. Bill bites his lip,  Hillary bemoans “income inequality,” and together they take middle to high 6 figures for 20 minute speeches to anyone with dough enough to buy future political influence. Reality needn’t spoil the charade. So long as one calls oneself compassionate and, above all, Liberal or Progressive, anything goes. Theft, graft, blatant selling of future favors in high places is no cause for concern.  One needn’t be good. Just throw a little money and a few well-publicized PC soundbites in a Leftist direction, and you’re One Of The People.

Other examples are the classic Fat Cats like Soros and Buffett and who cannily paint themselves with the thinnest veneer of political correctness and do-gooder philosophy and still function in stark reality like starving sharks in a school of guppies. Were they philosophical Conservatives, there would be no end to the outcry and condemnation. Instead, they are “Those Wonderful People.” Welcome to the Theatre Of Charity: Conspicuous Compassion  minus any need of positive results.

3 Replies to “Theatre of Charity: Conspicuous Compassion minus any need of positive results.”