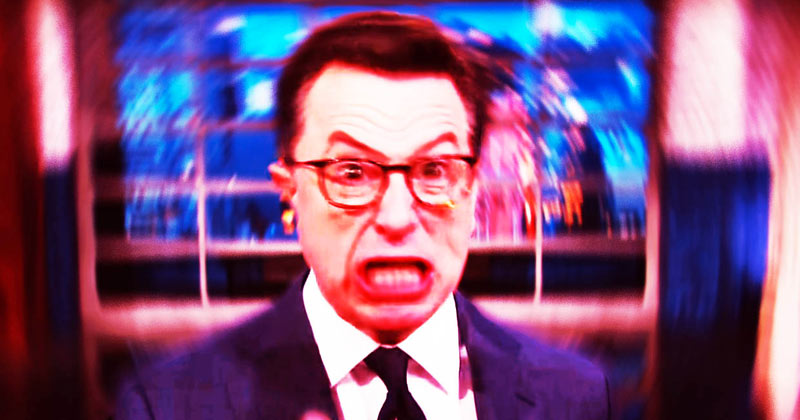 UPDATE 4/29/18: Sick unfunny “comedy” from the Left dives yet deeper into the septic tank and pretends to come up smelling like roses.

ORIGINAL POST 5/14/17: “Funny” how late-night network comedy has changed from the days of Steve Allen and Johnny Carson. Now we are treated to the likes of Stephen Colbert and Bill Maher. Lately, the mask has slipped from the ugly mugs of these two dead canaries in the Progressive mine notifying us with absolute certainty that the oxygen/blood supply of civility has really truly ceased reaching the vital organs of the Left. Anything goes. And why not? They’ve obviously got a nightly audiences (with attendant high ratings & ad revenue) that get off on it. Late night “comedy” has become 2017’s version of 1984’s Minutes of Hate.

Regarding the President of the United States to whom he owes his recently improved ratings, Stephen Colbert has resorted to the oldest homophobic slur known to every bullied adolescent boy since Adam.

Not as publicized but hardly coincidental: Colbert’s equally cold and clammy comrade Bill Maher is drawing great guffaws for precisely the same insult regarding Sean Hannity’s support of Trump. Take your pick of Maher’s sick sexual fantasies regarding those he and his guests detest. One appetizing broadcast has his distinguished guests sadistically fantasizing rape of a couple of Conservative politicians, male and female, straight and gay just to be all-inclusive as the Left prides itself in being. Again, who are the haters in today’s Left/Right face-off? 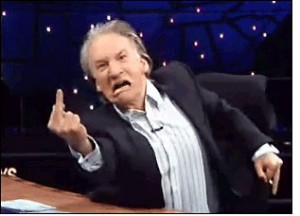 (Dis)honorable mention in this Late Night sweepstakes to join the anti-Trump Resistance: the formerly likeable and no longer amusing Jimmy Kimmel using his newborn son’s heartrending brush with death as a preface to putting Deplorable opponents of ObamaCare on public trial for baby killing. This one’s not going for laughs but instead drawing on that all-too-common Leftist Playbook ploy of wrapping a political sales pitch in a personal sob story. What heartless right-winger dare oppose that?

Colbert’s and Maher’s schoolboy gay-themed humor coming from Conservatives would have the Left setting up tumbrils and guillotines in every town square. Have we all not been ceaselessly lectured that these sorts of derogatory references to gay life have gone the way of watermelon/spearchucking jokes about Blacks and chauvinistic comments about “women drivers” and being viewed as mere “sex objects?” Feeling the slightest bit of heat, the jaw drops as Colbert walks things back a bit and adamantly re-establishes his credentials as an avatar of Lefty love and tolerance when it comes to oral sex. But when wishing to embarrass or humiliate a Conservative, why not resort to the old gay-bashing stuff left over from the pre-Stonewall days? Very Orwellian.

Interesting that an opportunist like Colbert also broadcasts what a devout Catholic and family man he is. Really. Just a good Christian, husband and dad. Another nice Orwellian touch, Steve. Anything for a laugh, right? And for a buck, lots and lots of them, available by the millions to these annointed court jesters of ObamaProgressoWorld.