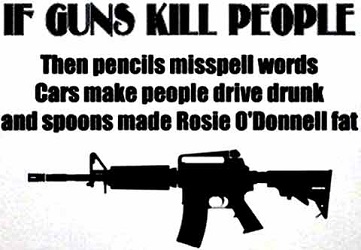 Guns, vans, knives, clubs, fists, liquor, drugs, any weapon…whatevah. Ask well-guarded celebs and their body-snatched followers and admirers, and they’ll all say peace will reign when the implements of destruction are removed from the world. Going after bad-to-murderous behavior and holding The Person responsible for their actions just doesn’t compute with the Progressive crowd. Remember how effective “It’s the economy, stupid!” was? Very helpful in winning an election. Likewise, a catchphrase on “gun control” might be helpful. Try “Hey, dummy! It’s the perp, not the prop!”

If that doesn’t change any minds (permanently bunkered away from common sense), just keep your NRA dues up to date and go regularly to the shooting range. Your proudly gunless neighbors will thank you when someone breaks in on them…or when someone starts shooting at them and their kids. Think of all those beautiful young Norwegians (totally undefended) picked off at summer camp like shooting gallery ducks, then think of those armed officers on duty at the Congressional softball practice. One scene is a mass slaughter of 77 innocents and one laughing murderer coasting smugly through a pretty cushy life in prison at taxpayers’ expense; the other a scene of 100% survival rate for the innocents and one very dead maniac. Take your pick.