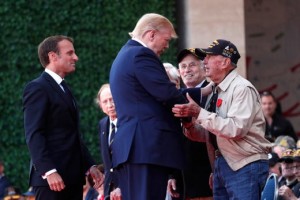 ORIGINAL POST 6/9/19: How fortunate we are to have a President who loves America, recognizes the rare, precious opportunity it has afforded him and hundreds and hundreds of millions of us over the brief 250 years of our free land’s existence. There would very possibly not be an America without the dramatic daring, heroism and ultimate sacrifice of D-Day, June 6, 1944, and we salute a leader fit to represent us and speak with suitable eloquence on the 75th anniversary of such a pivotal landmark in world history.

35 years ago, we were equally fortunate to have another leader capable of rising to such an occasion.

War is hell, war is sacrifice; and young men in the last century twice fought World Wars. One is at pains to make sense of World War I, seemingly just a family quarrel gone bad among the crowned heads of Europe, many literally related by blood to one another. Viewing the recently released masterpiece, “They Shall Not Grow Old,” one comes away with the leaden feeling that these young British men (and those Americans who came to their aid) were sent into slaughter for no real discernible cause. Were they stopping a specific tyranny, threatened conquest; or senselessly paying for the petty squabbles of disgruntled European aristocrats?

World War II posed the palpable threat of two blatantly aggressive powers seeking world domination. And, with the service and sacrifice of millions of young men, those tyrants were thwarted. Those young men, some not yet out of their teens, came of age in a generation expected to face adversity in life. A trio of individual stories tells the larger tale of all those brave young Americans: one scared young man who became a renowned actor, another  a beloved and admired father from Houston, and yet someone else’s revered father, a young Jewish immigrant turned American patriot, documentarian, optimist. Home of the Brave, indeed.

Such bravery and nobility were norms for the time, and one cannot avoid lamenting the difference in what is expected of the young today. We are humbled, and we are boundlessly grateful. God grant eternal rest and glory to those lost, the highest respect to those still with us, and God bless and continue to protect America.