UPDATE 8/29/22: Antisemitism in today’s Democratic Party is very much alive and actively driving sensible Jews to recognize where their true friends and advocates reside on the political spectrum. For some young college students, leaving America for Israel has become a sad but necessary choice. Perfectly understandable for anyone weathering America’s own unthinkable version of Mao’s Cultural Revolution now taking place on campuses here and abroad.

ORIGINAL POST 5/19/19: The unthinkable has now become the norm for the Democratic Party. As Leftist campaign organizers test the climate for the hot issues that will harvest votes, it appears that  a goodly portion of The Party has passionately embraced infanticide, antisemitism and (above all) Marxism as features of a better, braver new world.

While one evil sister of that notorious pair of Jew-haters in Congress embraces things Hitlerian, the other goes ga-ga for a prominent Stalinist. And rather than distance themselves, Dem leaders rally around them! Embarrassing? Antisemitism a third rail? On the contrary. They are rising stars, now proudly put on display, the new Party standard bearers. 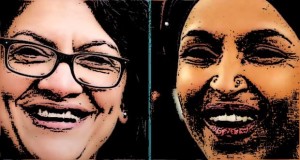 2 Replies to “Antisemitism-Infanticide-Marxism mainstreamed by Dem Party. Why not? It’s votes that count!”