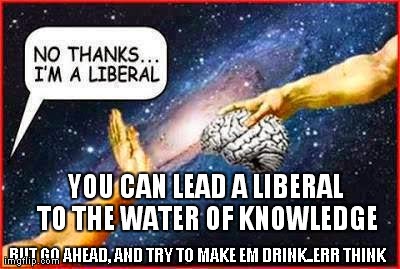 In our political lives today, we find ourselves at war with friends, relatives and strangers who refuse to accept that there are workable ways to overcome and solve socio-economic problems; and there are ways that….well…just don’t work. Never.

Those of us sweet on things that work (like capitalism, free market competition, living and let living) find ourselves villainized by those advocates of the consistently unworkable (like Marxism in all its lunatic incarnations, controlling other people’s lives and expecting them to like it). Ominously, American politics is no longer Conservatism vs Liberalism. Judging by that surreal gathering of Dem Prez wannabes parading before us like shrieky gay Frisco on Halloween, the American anti-communist Left has ceased to exist. The Democratic platform is now Free Stuff For All (paid for by somebody else of course). Moscow/Peking/Havana/Caracas!! Here we come!!

These aspiring Master Planners live and breathe for more regulation, more taxation, more control on everyone’s lives because-shock! surprise!-it’s a dangerous, difficult world. And they can fix it!! Completely! Permanently!! The Final Solution proposed by our political opponents on the Left is that everyone must pay for the sins, failings or disadvantages of all rather than each able-bodied individual being ultimately responsible for his own individual problems. In the Liberal/Leftist/Progressive/Marxist Master-Planning mind, everything is to be “shared equally,” including misery, deprivation and guilt.

Naturally the annointed heroes sent to earth to provide this EQUALITY of wretchedness are above having to share in this noble, collective doing-without. After all, some animals are more equal than other animals. The scarcities and sacrifices inherent in Socialism are for the Little People, the endless gravy train of Capitalist wealth and entitlement for their noble saviors.

How to account why so many “everyday people” (voters) passionately collaborate in their own enslavement, this suicidal/homicidal zeal?

Are they dumb? That would be the kindest assessment, for who can blame someone born with a deficiency of brain power, reason, the ability to register clearly and avoid the consequences of bad ideas and worse behavior?

Are these people just slothful, resigned, too intellectually lazy to think through ideas and their consequences, good and bad?

Are these otherwise decent-seeming people secretly harboring ill will and visions of dark destruction on their fellow men?

Most likely, in most cases, otherwise decent, intelligent people can say and embrace shockingly dumb, even evil things when indulging in the lazy luxury of Not Thinking. Instead, they FEEL (without thinking) as children and adolescents do  prior to tackling the realities of adult life.

The difference among all of us potentially dumb, lazy, malicious people is that some have swallowed the aphrodisial Kool-Aid pushed on all of us by the Left: and some of us have refused. That poison is the utterly false idea that life would be equally perfect for all IF ONLY other (presumably superior) humans on high (humans, not God) could take us all in hand and distribute life’s blessings EQUALLY. This is the essence and folly of Socialism/Marxism/Leftism/Progressivism.

“Transformation,” “equality,” “social justice,” “guaranteed ______ for all” all play into the unattainable longings of the mindless masses. The history of just the last century graphically demonstrate the rage and frustration, the unleashing of  the cruelest, most violent impulses of human nature in frustrated pursuit of the false promises tendered by the sinister politicians of the Left.  That hate is deliberately directed at those counseling freedom, capitalism, self-starting initiative, autonomy, independence, self-reliance. In this upside down world, real friends are targeted as The Enemy.

And if the enemy of my enemy is my friend, there is no quota on the lice-ridden bedfellows the Left can accommodate. Financial corruption & greed? Anti-Semitism? Eradicating free speech? Even murder? If all can agree to loathe Trump or Netanyahu and the conservative ideas they’re guilty of putting into practice, there are no limitations on the hate that is entitled to have a home here.