When asking why those caught up in the contradictions of Leftist thinking aren’t amenable to reason and logic, look no further than Orwell‘s explanation of DoubleThink:

“The power of holding two contradictory beliefs in one’s mind simultaneously, and accepting both of them….To tell deliberate lies while genuinely believing in them, to forget any fact that has become inconvenient, and then, when it becomes necessary again, to draw it back from oblivion for just so long as it is needed, to deny the existence of objective reality and all the while to take account of the reality which one denies — all this is indispensably necessary. Even in using the word doublethink it is necessary to exercise doublethink. For by using the word one admits that one is tampering with reality; by a fresh act of doublethink one erases this knowledge; and so on indefinitely, with the lie always one leap ahead of the truth.”
— George Orwell, “Nineteen Eighty-Four”

“To tell deliberate lies while genuinely believing in them. to forget any fact that has become inconvenient…” 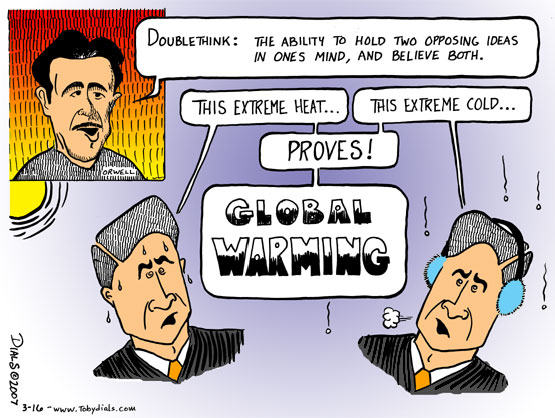 Wonder no more why it’s so hard to call out Leftists as hypocrites. If there are no bounds to what they believe or claim to believe, who can fault them? They are all things to all people all the time, whatever’s convenient to the moment. Those Conservatives insisting on rock-solid principles and hard facts are easily branded “hypocrites” at the merest glimmer of human inconsistency or contradiction.

What better example of denying objective reality than a person who decides that He is a She; that she, despite being White, is Black. In both eerily conjoined cases (Bruce/Caitlyn, Rachel/R’chelle), there is Celebrity, Money, Power to be acquired. For the more sinister forces encouraging the dissolution of norms, customs, definitions, standards, constants, any bedrock under our feet, there is Mass Control.

Sound chillingly familiar? Behold GLOBAL WARMING (formerly COOLING, now conveniently changed in classic DoubleThink style to CLIMATE CHANGE  accommodating the fact that weather & climate change, irregardless of Man). MARRIAGE is no longer heterosexual, a man and woman. Even the term “homosexual” is now considered negative and hereby banned from polite conversation. Gender is no longer male and female. Race is no longer genetic. As the saying goes these days when faced with reality: WHATEVER.

Whatever indeed. Confusion, blurring of distinctions, the erasure of commonly held meanings, borders, boundaries, whatever contributes to the destabilization necessary for mass manipulation and control. Currently in the West, this relentless drive toward totalitarianism comes almost exclusively from the Left (those promising all the “entitlements” of life to the dependent masses courtesy of society’s productive members aka redistribution of wealth). By contrast, fanatic Islam (like Nazism before it) is straight-forward, overt, more unabashedly intent on control and domination, not into the gradual, psychological maneuvering that characterizes our Marxist manipulators.

THE GOOD NEWS is that we live in times of the widest and freest exchange of information ever possible. Freedom of speech, the First Amendment, seems to be in its heyday. On the other hand, this ability to reach millions in milliseconds has opened the door to the sinister forces of Mass Control, and the masses predictably are eager to be controlled. The immediate, very real  danger is the fear genuinely free-thinking individuals have for expressing unpopular, contrary politically incorrect thoughts and opinions. Social Media hounding, viral piling-on, public excoriation has become a tactic used against public figures, businesses or anyone taking a stand unacceptable to that dictated from today’s Left.

Just in case, you’ve never experienced that disturbing sense of isolation and fear of expressing yourself, spend five minutes with  your average cross-section of friends, neighbors and relatives and bring up Climate Change, ObamaCare, Gay Marriage or any key item on Obama’s Transformative menu. At the very least you will find yourself on the receiving end of an insult tirade or a chilly glare. (If looks could kill….) Legal action has always been a tried-and-true weapon for the rigidly intolerant Left. However delivered, the goal is to silence and isolate you.

Our Mission Impossible (which we have no choice but to accept!) is to continue speaking, thinking, writing, communicating freely and repeatedly with others who sincerely believe that individuals make up a free, civilized society, not mindless, robotic masses marching together in electronically-induced lockstep. 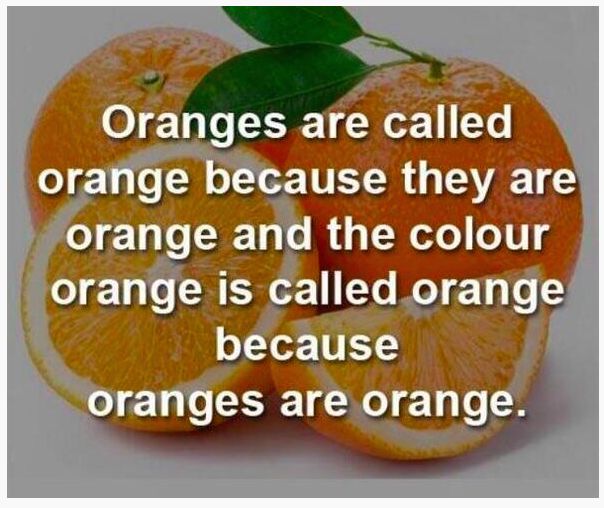 And enjoy the laughs and absurdity along the way. There is plenty of both.

5 Replies to “Surviving The Age of Mass Delusion”