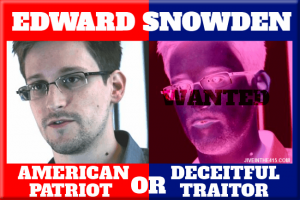 Snowden: which is it?

UPDATE 9/19/16: Another editorial lambasting Snowden. And it mentions that the dependably anti-American Oliver Stone has made a hagiographic film about him, almost certainly verifying that Snowden’s on the wrong side of things.

UPDATE 7/22/15: According to intelligence experts, Snowden’s revelations about Western surveillance have been a huge boon to terrorists, not to mention any criminal under investigation.

Few stories challenge both Left & Right more these days. In the bizarre saga of Edward Snowden lie all the murky Orwellian elements of our uniquely disturbing times.

For some old hands, no question: just the latest dirty trick played on us by longtime enemies like Russia, confusing us by portraying a garden variety mole as an American patriot.

For others, the focus is on what Snowden has exposed on our end: violation of our Constitutional rights to privacy in the name of “national security.” Challenging those who have reflexively branded Snowden a traitor: what is being done to curtail the American government abuses exposed? Heroic or irresponsibly self-serving, Snowden has exposed real corruption that begs reform. Where is the passionate pursuit of those crimes?

The  “agnostic” position regarding Snowden: he blew the whistle on a corrupt American espionage network that spies on innocent Americans in the name of “national security.” He’s labeled a traitor by those many would consider treasonous themselves: Obama, Kerry on down. Snowden’s detractor list would endear him to most Conservatives, but his detractors also include Republican notables in high places like House Speaker John Boehner. Have we forgotten? The enemy of my enemy is NOT necessarily my friend.

Some questions for Snowden’s apologists:

what’s he doing seeking asylum in Russia with equally anti-American places like Cuba as alternate hideouts? Why, his advocates explain, he just happened to be passing through Moscow airport when the American government revoked his passport. ?? Who just happens to find himself passing through Russia by accident?

At what point, if any, has Snowden’s activities transitioned from heroic whistleblowing to reckless irresponsibility, even treason?

Giving a whistleblower like Snowden the assured opportunity for a full public hearing without fear of automatically being branded traitor or hero is ultimately the answer. In so doing, all sides are aired, abuses are exposed and legitimate surveillance can continue. Snowden himself may risk being punished for stealing and exposing classified materials, but if he’s honestly concerned about protecting America both within and without, one would think he’d welcome an open airing-out of the whole affair.

And so he does. From page 2 of the Wired interview: “Snowden still holds out hope that he will someday be allowed to return to the US. ‘I told the government I’d volunteer for prison, as long as it served the right purpose,’ he says. ‘I care more about the country than what happens to me. But we can’t allow the law to become a political weapon or agree to scare people away from standing up for their rights, no matter how good the deal. I’m not going to be part of that.’ ”

Who can object to that?

Snowden-Traitor or Hero, one of the great head-scratchers of recent times: A, however B, but C, on the other hand D… With even the most serious things involving our most imperfect human race, there is much-appreciated relief in a humorous twist.