Unpopular? Not winning elections legitimately? Can’t force self-reliant voters to surrender their liberties? More and more, finding yourself out of power? 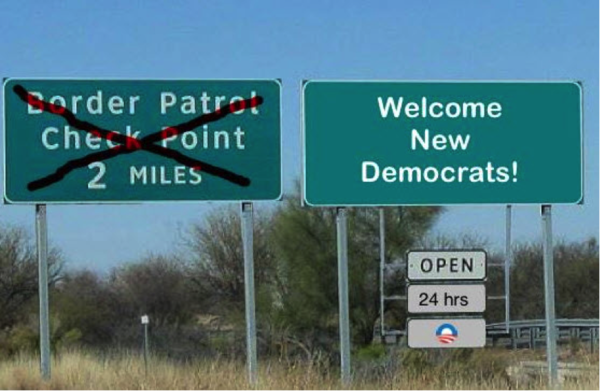 UPDATE 4/15/21; They call them “Dreamers” referring to those wanting a crack at the American Dream. In reality, it’s population/voter replacement, each new illegal  let in and naturalized (and bribed with taxpayer money) negating the vote of a fully legitimate American.

Pictured,  the poetry of the selectively outraged, showboating Liberal/Leftist, her discriminating DIZGUST! entirely dependent upon who’s caging the children and creating a humanitarian crisis. It reads ” The DEVIL loves hearing Scripture used to defend harming BABIES & CHILDREN. He must be very proud..(?)..AG.” 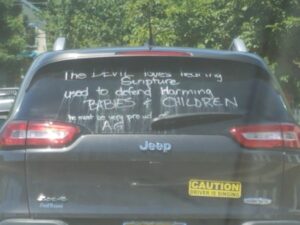 Pictured: big meanie monster DEVIL Trump…who in the real world reduced the flow of illegals over the border to a trickle and was in the process of building The Wall. Meanwhile, the puppeteers pulling the strings of a senile hologram from Delaware have created a humanitarian crisis. No child-loving, incensed scrawls on your $40K SUV rear window for Joe and Kamala? 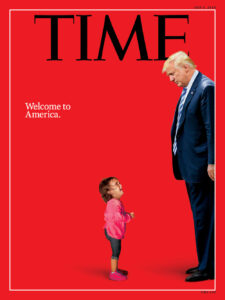 This growing catastrophe and complete abdication of responsibility by the so-called “leaders” who created the mess underscores the fact that Leftism doesn’t work because Leftists themselves don’t work. They just amass  power and hope to hold on to it. Tackling and completing a real job? Getting beneficial results? Nothing to do with it.

ORIGINAL POST 10/28/18: Sow a little chaos, violence and distraction. “Cause a crowd…” from South Of The Border. If things are really going your way, there will be some gunned-down martyrs… All just before the midterms which is a pivotal referendum on a) following thru with Trump or b) going back to the Obama/Hillary “transformation” into Venezuela.

The latter sounds like something George Soros (and family) could get behind.  In collusion with Aunt Nancy.

It IS most definitely something the most prominent figures of Leftwing DC and Hollywood ARE behind.

If there is one thing that motivates today’s Dem Party, it is Selective Outrage. Some call it hypocrisy, but Dems are way beyond that.

Wasn’t it Congresswoman Waters shrieking to her mob to “Cause a crowd!?…” and publicly harass their political opponents. And Hollywood highbrow De Niro who wanted to punch Trump in the face? Wannabe “comedy” creeps sport the President’s guillotined head and other noble exercises of free speech to hilarious effect! Priceless! The permanently disgruntled Hillary promises a return to civility on the sole condition that she be handed back her crown!  Remember effete street tough Butch Barack who counseled his mindless rabble to “get in their faces…, if they bring a knife to a fight, we bring a gun?” And the nation’s former chief law enforcement officer Holder elaborating on Michelle-Antoinette’s charming aphorism,  “When they go low, we kick them.” Good ol’ Uncle Joe Biden tells a Black audience that “they’re gonna put ya’ll back in chains again.” 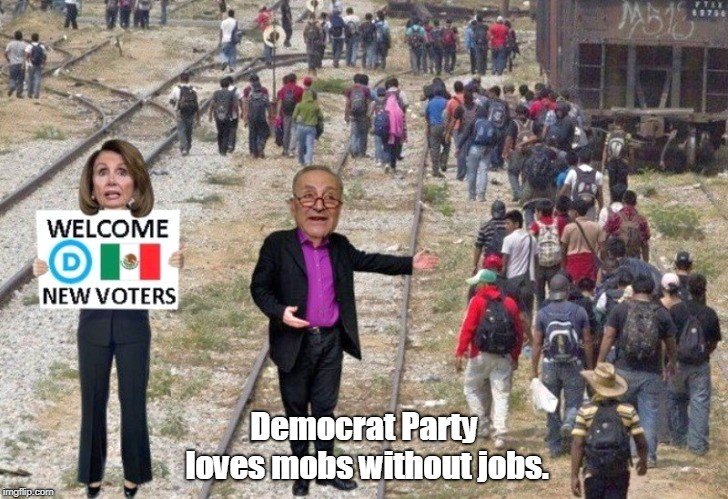 These are not fringe kooks sending poison through the mail or “lone wolves” shooting up Congressional ballgames & places of worship but the most prominent figures in DC and Hollywood. This is official Dem Party policy. And whadya know! Not a word of caution, reprobation or restraint from anywhere in their ranks. Until, until….

This week as midterms approach (along with a manufactured mob of paid border crashers), a feeble-minded loon, most likely prodded by forces yet to be determined, sends out dud bombs to prominent Democrats. OUTRAGE from Hillary’s sensible, innocent Basket of Adorables! Calls for “unity,” “civility,” “the American Way” coming out of the same mouths previously applauding violence and disruption as justified means to their noble ends. After all, we’d all be living in Woodstock Nation were it not for Trump’s hate speech! Then, laughably, the next day the MSM flagship NY Times publishes a shameless, delectable piece on assassinating Trump. Whoops.

May the only explosion be that of the proverbial cigar and rotten eggs permanently splattered all over the face and front of the Democratic Party and its mindless enablers. How gratifying would it be to see an overwhelming popular clamor from decent folk of all persuasions to Build The Wall! in response to the undisguised treachery of a desperate Dem Party vanguard.

And a total rejection of what has become The Dem Way, very akin to The Chicago (Mafia/Gangster) Way. This is still Obama’s Transformation we’re pushing back.

One asks, again as in 2016: are there enough Americans repelled by the Dem idea of politics? Are you out there: you millions who consider yourselves autonomous individuals, not members of this or that obedient ID group (aka voting bloc)? May that mysterious Silent Majority speak again as when it sent Hillary permanently to her Chappaqua liquor cabinet. Fervent prayers that we continue on the hopeful path of real progress miraculously offered us in 2016.