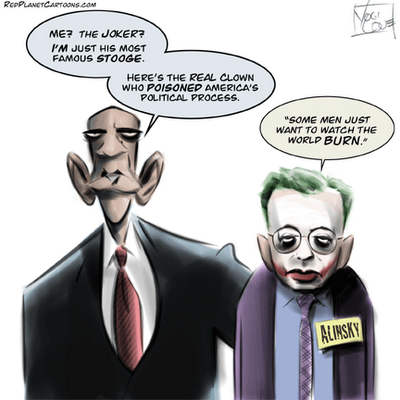 To not understand the influence of the evil Community Organizer genius Saul Alinsky is to surrender to  the epic and unsettling Transformation of America that Obama promised. Effectively, we are well into the process of being divided and conquered, a nation of individuals coerced into masses of warring Identity Victim/Perpetrator Groups, our  freedom, self-reliance,  confidence, personal autonomy threatened.  We experience the poison of Saul’s wicked brew in our most casual social encounters. We live it in the blatant disregard of Constitutional separation of powers when an activist Leftwing Supreme Court suddenly hands down a string of blanket decisions that should be matters for individual States. Street criminals are elevated to heroic martyr status through the staged racial conflagrations of Ferguson and Baltimore. It is everywhere and constant, and the result is widespread demoralization.

What has made this possible? It would not be possible if millions of ordinary people weren’t somehow made to feel they must cooperate in their own enslavement. Like residents of those Italian neighborhoods ruled by the Mafia, America has become largely a community of The Intimidated, playing along to get along. The Transformation of America is Alinsky’s grandest Community Organization project, and though deceased decades ago, he remains Transformation’s most compelling theoretician and activist. Obama is The One who has moved Saul and his scruffy minions from the fringes to the highest seats of American political power. Alinsky, like Hitler, had a genius for understanding and implementing the principles of mass psychology, turning otherwise decent, autonomous, decent individuals into mass weapons of destructive tyranny.

Know “Rules For Radicals”, and one comes up against what’s happened. Not a comfortable thing. In a sentence, Alinsky’s minions make up their own rules, any means justifying their ends. Read ’em but don’t weep. Admittedly, such tactics run against the grain of what’s best in us. Our power lies in recognizing the poison when it is administered. often unconsciously by people who have never even heard of Saul Alinsky. As millions of individuals have been cowed into submission by Alinsky tactics, so perhaps millions can be restored to their core sense of themselves. Putting aside the many reasons not to trust him, Donald Trump’s current popularity among Conservatives is based on his consistent unwillingness to be intimidated or silenced. Conservatives can and must take the offensive without losing their souls. This can be the story of how our great civilization can be destroyed from Community Organizers within AND how, hopefully, we can be redeemed, one of us at a time.

9 Replies to “Beating the Alinskyized Left at their own game”