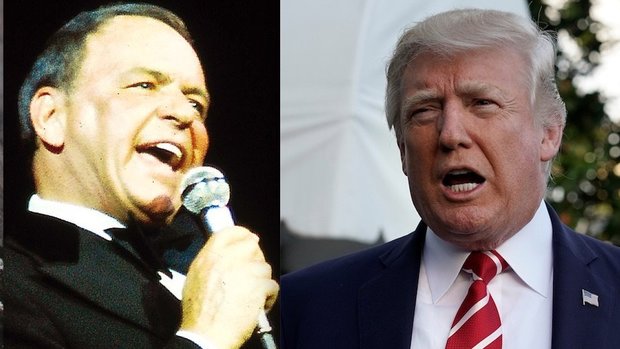 How our society has devolved from the late, lamented time when the most popular singer in the land, possibly the world, could be the same guy who’d literally punch out an obnoxious member of the press in the morning, then recount in song how “you lie awake and think about the girl…in the wee small hours of the morning; that’s the time you miss her most of all.”

In the stunning paradox that was that sensitive lout from the Hoboken docks lies most of what one needs to fully comprehend Breitbart’s trenchant observation that  politics is downstream from culture.“

Downstream from a culture that lionized a Frank Sinatra and the glorious songs of his era were the politics of self-preservation, self-reliance, hard work, imagination, creativity, persistence, the inner resources to live and love friends and family that won World War II and made America as vital an atmosphere of freedom and prosperity as any human civilization has ever  been.

Conversely, isn’t it logical that a culture that richly rewards criminals in the fields of entertainment and sports should deteriorate into an enraged, infantile politics of permanent resentment and victimhood?

Among the many high points of the Sinatra Age, 50s & 60s America made huge strides in areas long overdue for correction, racial discrimination in particular. Sinatra himself was even directly instrumental in that progress, demanding the inclusion of Black pals like Sammy Davis, Jr. into previously segregated venues. The tragic irony is that alongside that progress came the cynical new political strategy of LBJ and his Democratic Party to see that they would “have those niggers voting Democratic for the next 200 years.” A brilliant strategy if brilliance is to be judged by effectively gathering huge masses of dependents into permanent voting blocs. Blacks and a subsequent viral plague of newly realized “victim” groups continue to be hooked on soul/society-destroying helplessness.

In the blink of an eye, how far down we plunged from JFK’s 1960 exhortation for Americans to “ask not your country can do for you, but ask what you can do for your country.” Likewise, behold the swift, politically expedient repudiation of that gospel of self-reliance and patriotism by his own totally decadent youngest brother.

The corrupt and corrupting Orwellian orthodoxy of Political Correctness espoused by Obama and Clinton have brought us to the brink of self-extinction, domestically and internationally.  Like the Kennedy family devolution from Jack to Teddy, note how even Sinatra’s own politically correct and pampered daughter, the former “Nancy with the laughing face,” can stupidly call for the firing squad execution of more than 5 million NRA members in knee-jerk reaction to the action of one Vegas madman. We’ve wearied of everything unpleasant being politicized, from the weather to offensive humor, all a rationale for greater (Democratic) government control and regulation.

Enter a Sinatra-esque figure named Donald Trump. The similarities are hard to ignore. Here is a pugnacious Big Biz basher  with a taste for flash and glamor, beautiful young women, golf  clubs and casinos, an unabashed capitalist inviting us to Make America Great Again. Given the inevitable consequences of a Hillary Presidency, millions of us have enthusiastically, hopefully, guardedly supported him. Judging by his first year and particularly in the last few weeks with his putdown of the NFL flag/anthem-bashing and now his ObamaCare end run around an inert Republican Congress, our somewhat blind faith in a genuine maverick and outsider appears to have been a gamble well worth taking.

Perhaps in the most unusual political climate of our lifetimes, we’ll also see that culture can reverse direction and benefit from being downstream of politics.  The Fat Lady hasn’t sung yet after all, but our new Chairman of the Board is certainly making some beautiful music. With legitimate optimism, one can say, “You ain’t seen nuthin’ yet.”

2 Replies to “The Sinatra Factor”