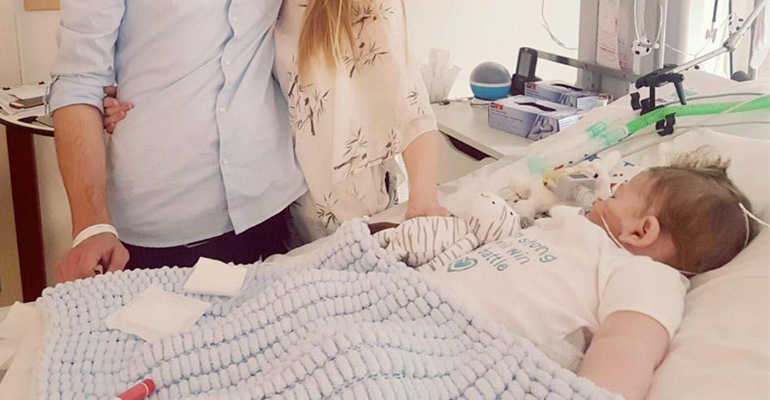 UPDATE 9/27/17: New darling of the ObamaCare Left, comedian Jimmy Kimmel seems to have forgotten the pronounced downsides of socialized healthcare as demonstrated in the Charlie Gard case. And then there are the blatant falsehoods about the availability of healthcare in America that have allowed ObamaCare to invade our lives. But it does make him and his fans  feel good about themselves.

UPDATE 7/25/17: The parents announce they will not seek further treatment for their son, and he will taken off life support. All decisions should have been theirs all along, not the bureaucrats of the NHS. There is no such thing as free healthcare…or anything else. Payment will be extracted.

The harrowing Charlie Gard case in the UK exposes the fundamental fallacies, lies and evil at the heart of “free” socialized healthcare. A young couple are being denied a say in the medical treatment of their desperately ill child. The struggle over this baby boy’s fate brings to light the even more basic concepts of private ownership and liberty that comprise the core of Western civilization. We refer to ownership of one’s life and of one’s children.

By bizarre Kafkaesque logic, this baby is by virtue of his British citizenship the property of the National Health Service(NHS), not of his parents. The parents have been informed that only the High Priests up there in The Castle can decide what, when, where, how and if their son gets medical treatment. This is not even a matter of  “whoever pays calls the shots” since the parents have over $1.5 million in private donations to pay for Charlie’s treatment and are begging to go to America where the most advanced medical help awaits. They have even been granted official U.S. residency status, and still the socialist chains of their British citizenship remains The Obstacle. As the boy’s life ticks away, they have been informed that “a ruling is expected on Charlie’s future next week.”  Next week?! The cold, robotic cruelty of bureaucracy could not be laid bare more crassly, and yet it’s the norm for all subjugated to a Statist society, living and dying at the whim of bureaucrats. What saith those who jeered Sarah Palin and her warnings of such Death Panels, an inevitable consequence of Obamacare and the healthcare rationing it guarantees?

What the beneficent State giveth it can just as easily take away or deny. Including your child’s life.

The sordid images of enthused Obamacare operatives Zeke “Dr. Death” Emanuel  and the uniquely disgusting Alan Grayson‘s poster board demo on the floor of Congress come chillingly to mind. According to their inspiring discourses and the likes of Barack Obama, Hillary Clinton, Nancy Pelosi, Elizabeth Warren and the rest of the Dems clamoring for our own NHS, anyone opposing the wonders of Obamacare wish death upon the innocent, the inconveniently ill. On the contrary, these champions of Single Payer/Socialized Medicine/nationalized healthcare wish nothing less for themselves than the absolute power of life and death over all of us.

Repeal ObamaCare. Aside from its inhumanity, the Affordable Care Act is unaffordable. Medicare/Medicaid admits publicly it’s going broke. And the government can’t fix it. Only the free market can. De-regulate and reform the medical insurance market. More to the point, do not turn your lives over to the heartless, robotic bureaucrats of “socialized” anything. There’ll be a steep price to pay for the “free” goodies they promise.