UPDATE 1/19/16: Never any shortage of repeated, matter-of-fact lying coming from our esteemed politicos on the Left. By definition, the persistent lie is old news and boring by design. The truth is always fresh and invigorating, always a source of hope that the Good Guys will prevail. Hillary’s cover-up and string of lies about Benghazi have not gone away and now have reached a critical point. One can only marvel at the coldness and cruelty of the woman. Let us pray that two recent quotes are, finally, the fat lady’s final aria, bringing down the curtain once and for all on the Clinton Soap Opera: 1) Who’s lying about Benghazi? You or the victims’ families? “Not me,” says Hillary.   2) Undoubtedly exempting herself, Hillary proudly announced, “There should be no bank too big to fail and no individual too big to jail.”

Everyone wants to be right in an argument, but nowadays few (particularly on the Left) feel obligated to back their arguments and opinions with documented proof or, more importantly, logic. Impressive statistics and quoted sound bytes can be made up, doctored, manipulated. Repeat lies, half-truths, all-out propaganda often enough, and it becomes gospel among the sheep.

The history of the Left is replete with such persistent myths: toss out just a word or two, and the phony narrative is repeated with the same confidence that one might opine that “apples fall down, not up.” McCarthyism! Black list! Never mind the country and the government of the Fifties were full of Communists. But that, in turn, required the soft-soaping of the Communist holocaust that dwarfed the concurrent Nazi version by a factor of at least 10 or more. The Spanish Civil War! Franco! Guernica! La Pasionaria! No pasaran! and your average Leftwing firebrand will practically swoon with the righteous, passionate rage of the politically enflamed! The real story of that wretchedly romanticized episode is something else.

Of late: “97% of all scientists are convinced of man-made Global Warming!” Repeat a mendacious meme consistently enough (“Looking out for the Little Guy!”), and you have the sorry specter of a Mr. & Mrs. Billy Jeff Clinton still raking in the Big Bucks and going after major power after all these years of self-aggrandizement and obvious, endless corruption. Or the ongoing saga of the tender-hearted Beloved Leader Obama pleading tearfully for the confiscation of guns. Needless to say, like other Leftwing Elitists with well-armed security details, he has not requested that the Secret Service turn in their heat, his life and that of his fellow Big Deals apparently being much more important to defend than yours or mine.

Lie, lie, and lie again. So it has been with countless totalitarians, past & present. Nazi propagandist Goebbel’s truism is the most celebrated quote on the subject: “If you tell a lie big enough and keep repeating it, people will eventually come to believe it. The lie can be maintained only for such time as the State can shield the people from the political, economic and/or military consequences of the lie. It thus becomes vitally important for the State to use all of its powers to repress dissent, for the truth is the mortal enemy of the lie, and thus by extension, the truth is the greatest enemy of the State.”

The only antidote is countering each repeated lie with the truth. Repeatedly. Again. And again. 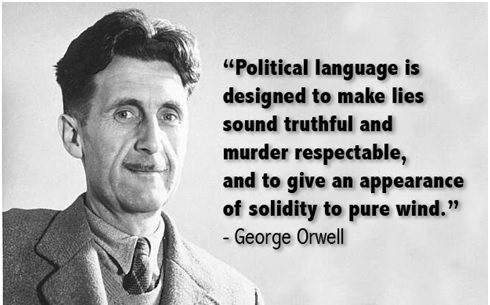