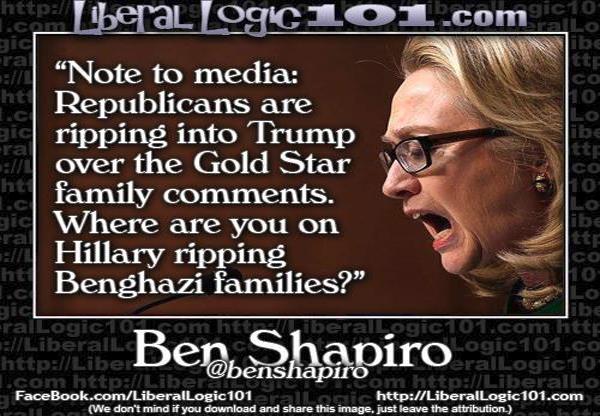 Trump rather delicately (for him) countering a totally dishonest personal attack from a grieving father and Hillary calling a grieving mother a liar are hardly comparable.

On one hand, the father, Khzir Khan, is a planted Dem operative with close MONEY ties to Saudis, to the Clintons, a legal eagle hustler selling high-priced green cards to incoming Muslims. Most damning of all, he is on the record declaring that Sharia Law takes precedence over our Constitution. So much for the empty theatrics of pulling (supposedly) his own dog-eared copy of that inferior Infidel document from his pocket to make himself look somehow more American than Trump (who, unlike Hillary Clinton with her Benghazi victims, played no part whatsoever in the death of his son in combat.)

Leftists all up and down the political spectrum often resort to hiding their own subversive intentions behind living American concepts like “Freedom of Speech” and “Constitutional Rights.” Putting Orwellian Doublethink on overdrive, they declare themselves patriots while simultaneously advocating and even committing the most blatant sorts of treason.  Is not selling political influence to foreign interests intent on infiltrating and strangling American freedom betrayal of our security, a deliberate gift to our own executioners? Google “Hillary,” “Russia,” “Uranium One,” “State Department” for reference.

In the case of Pat Smith: her son died because then-Secretary of State Hillary Clinton ignored Ambassador’s Christopher Stevens repeated requests for additional security, leaving Stevens, Smith’s son and two others high and dry to be slaughtered on the evening of 9/11/12 at the Benghazi embassy compound. Covering her incompetence, indifference and more sinister doings (if emerging information about gun-running is to be believed), Clinton lied to the parents directly that the whole thing was a spontaneously violent demonstration in response to an anti-Islamic YouTube video. Emails written that day vouch for the fact that Clinton knew it was a premeditated terror attack. The Obama administration went along with the ruse briefly since the 2012 election was imminent, and ignoring a terror attack might look bad for a candidate claiming to have Al-Qaeda on the run. More to the point, such a demonstration of heartless mendacity mixed with incompetence might harm Hillary’s own long-planned run for the Presidency.

“‘Somebody is lying,’ said McLaughlin. ‘Who is it?’ Clinton replied, ‘Not me, that’s all I can tell you.‘”  And that was preceded by the now-infamous “What difference does it make?”  Still, not mean and cold enough for Dems to disassociate themselves. One prays that there are some I-Hate-All-Republicans voters who might experience the appropriate amount of revulsion at least  to keep them home on Election Day.

Doubtful. The Left’s Conspicuous Compassion once again is reserved only for those who robotically walk the Party line. Sad for all those who missed the joys of Soviet Russia. Perhaps this is all an attempt to recreate that Paradise. A good half of our population seems to have an inordinate fear of freedom, preferring Big Brother’s (or Big Momma Hillary’s) directives to a self-directed life.