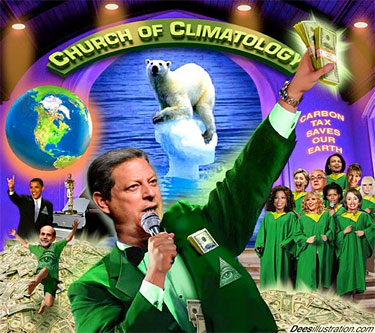 Follow the money. Aside from its totally sinister political implications, there’s a great deal of filthy lucre to be accrued from the purported “manmade” global warming (climate change) “crisis.” That includes the profit motive (aka Leftwing Greed, supposedly the exclusive province of the Right) underlying the  so-called “science” behind the panic. Obviously, there’s a great deal of resistance to exposing the deliberate hoax it is. Skeptics are likened to Holocaust deniers. Being rightly called Global Warming Nazis in response displeases the earth-loving Believers.  Some suggest immediate imprisonment for those not going with The Plan. On the rational side, those not intent on the Stalinist takeover of science (and all human activity) continue the honest debate: science or science fiction?

The only undeniable manmade Global Warming is all this hot air about 97% consensus of scientists, For the rational and honest in the science community, life goes on.  Not so those who are heavily invested in the Big Lie.

Genuinely smart money says to place your bets on the planet surviving just fine. The alternative is the iron yoke of One World Government put in  place to “save” us all from this “crisis.”  One of many crippling side effects is a legal system overrun with frivolous Global Warming litigation: “Big rainstorm comes, floods your house, that’s global warming, Whom can I sue?”

For hysterical believers, there’s panic at nature’s refusal to cooperate with their phony narrative. Global Warming inconveniently “pauses.” The ice cap grows! Polar bears thrive! How can this be?! Climatologists are baffled. This is not in the script. It’s was all settled! Unbridled capitalism is destroying the planet!

It’s hardly an accident that both Barack and Hillary are positioning Global Warming…er…Climate Change…um…The Weather as the most critical issue of All Time: it’s a hoax millions of fools want to embrace in their desperation for Big Brother’s love and protection.

To invoke reality aka honest, apolitical science: “…alas, it isn’t going to happen.” Like the old SNL joke: Francisco Franco, still dead. Global Warming, not happening. Climate Change? Duh. It’s the weather, stupid. That’s what it does. Perhaps the weather has paused for a nap, a golf game or afternoon tea. In the meantime, carbon-spewing private jets full of crony capitalists rush about our “threatened” globe to make their financial killings before the jig is up. Follow the money, follow the money, follow the money.

9 Replies to “The Climate Change Industry:
Heavy inve$$tment in a lie”