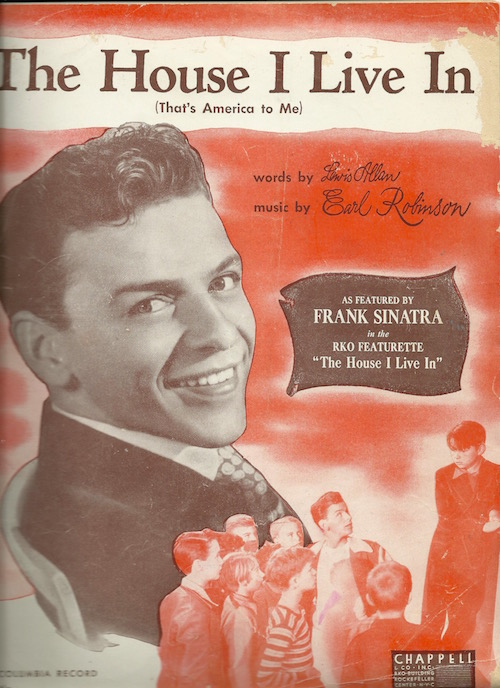 There was a time when even avowed communists had a startling recognition among their utopian, delusional Soviet dreams that there was undeniable greatness at the heart of America. Take the case of Abel Meeropol, writing under the pen name Lewis Allan, who crafted the lyrics to the inspiring Frank Sinatra wartime movie short “The House I Live In.” The lyrics celebrate the America of small towns, big cities, “but especially the people” going about their business independently, FREELY. What American, liberal or conservative, could or can fault its sentiments and unabashed patriotism?

Meeropol would also write Billie Holiday’s harrowing “Strange Fruit,” a poetically graphic account of Black lynchings  in the Deep South. Clearly, he was a talented artist moved by both the soaring greatness and grave shortcomings of American life. And he should be remembered and honored as such. Both songs are still sung and worthy of their durability.

The Left claims to own such “protest” as exemplified by “Strange Fruit,” but factually no decent person anywhere on the political spectrum, then or now, could object to exposure and correction of  injustices and blatant flaws in our society. It remains a mystery of human complexity to explain the contradictions within each human soul, and none poses a bigger question than how Jewish Americans like Meeropol (or anyone FREELY enjoying the blessings of living in a FREE country like this) could embrace the Marxist ideology of mass human enslavement.

Thanks to the wily Stalin positioning himself as America’s ally during WWII, the un-Hitler, the original “anti-fascist,” conservatives are still branded by the Big Lie of anti-communism being “fascism.” The very definition of “fascism” and its omnipresence on the Left conveniently continues to be shrouded in deliberate fog. Is not the domestic terrorism of Antifa Black Shirts not an outpost of the Left? How perpetually easy it continues to be for the Left to disable any opposition to its totalitarian, Stalinist agenda by branding ALL opposition as Adolf’s fellow travelers, racists, Nazis. [Reminder: Nazism is abbreviated National SOCIALISM, and Hitler’s brand of socialism has paled in comparison to Stalin/Mao/Castro/Chavez/Pol Pot/Norks when tallying up numbers on systematic extermination and murder.]

Meeropol’s life & legacy shines a necessary light on the deliberate misconception still firmly planted in our political lives, traceable back to Stalin, that uber-granddaddy of genocidal evil. Meeropol was a typical Jewish-American besotted by the romance of Soviet Russia, even to the extent of being so deeply involved in American communism that he stepped up to adopt and raise the orphaned children of Red spies, Julius and Ethel Rosenberg. Meeropol would never fully recant  his idealized view of the great Marxist murder machine. Like religion, political zealotry dies hard. But in the end, however politically obtuse, Meeropol’s artistic life and legacy, the songs, far transcends his politics, as they should.