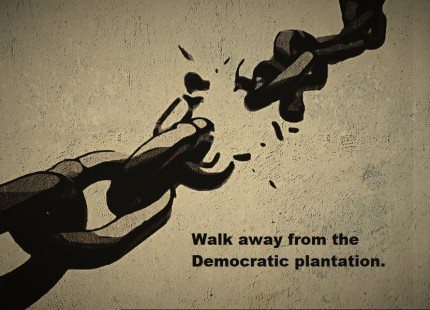 Can it be? Hillary voters, lifetime reflexive Progs, WALKING AWAY from the Democratic Party? Perhaps it’s a combination of human decency and common sense, people embarrassed to be associated with a Party for whom Power is everything, its desperate face that of Maxine Waters [“Cause a crowd!”], Nancy Pelosi [“Uprisings!”], intimidating, ambushing Trump supporters wherever they can assemble a mob.

Something is bubbling under the surface, something that reflects a voice for people up to now trapped and silenced. Should common sense prevail and things play out among a significant number of the Formerly Faithful, the Dems are not going to like it one bit.  All those guaranteed votes from the Inner Cities! Oh my! Those millions of extra votes for Hillary guaranteed by permanent pockets of dependency! Poof! The next generation of all those LBJ “niggers voting Dem for the next 200 years!” Lost! All those Dems-For-Life they’ve been counting on. Gone! [Damn, damn, damn the Electoral College!]

Perhaps there’s a limited shelf life for a Party promising Free Things for decades and delivering only ruin and misery.

5 Replies to “The God That Failed, Revisited: “Once upon a time, I was a liberal…” Time to Walk Away.”