Remember Al Capp? L’il Abner? The Shmoo? That was the amiable creature who delighted in providing every imaginable need for the citizens of Dogpatch while, at the same time, swooning in delight as people would devour them. The problem with Shmoon (plural for Shmoo) was that people got fat, sick & corrupt with everything automatically handed to them. So the Shmoon were blamed and had to be exterminated. All needs met? Shmoon providing all manner of good things and getting eaten for their trouble…and being willing, eager participants in their own destruction? Socialism, anyone? Jews? Blacks? 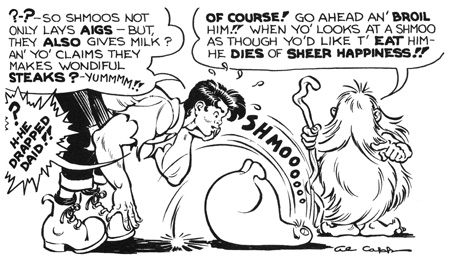 It’s heartening that the Walk Away from an infanticidal, anti-Semitic Democratic Party is gaining traction. In particular,  Jexodus  and Blexit are long overdue. Blacks have been literally bribed to vote Democratic, exhibit A being the cancerous welfare culture of the Inner Cities. But the Jews remain a mystery, a people who have thrived in the American capitalist marketplace like no other. Yet they insist on voting overwhelmingly for the same Leftist hucksters who hate them.

Jews pride themselves on being of smart, virtuous stock, and for good reason. In a matter of a years (not even decades) our great-grandparents & grandparents went from being derided, penniless immigrants in slums to creating American Popular music and curing polio. Our parents, the first generation American children of those immigrants, gutted it out through the Depression & WWII , compounded the benefits of our grandparents’ newly blazed trail to America and became well-heeled professionals and pillars of the community.

The American Dream was theirs as they beseeched their children (us baby boomers) NEVER to forget our humble origins. But this was not intended to be a simple healthy humility tempering the equally healthy pride of achievement. We were (and here’s the fatal, essential psychological catch leading to guilt-driven political choices) permanently in debt to “society.” Not to God. Not beholden to the mysterious workings of Fate and a benevolent Deity overseeing the lives of ALL people.  We were to owe all, to “give back,” in perpetuity, to “society.” Otherwise, we’d be judged as being as rotten and heartless as that nasty, bigoted American (Gentile) Establishment that was so unwelcoming to us when we arrived in steerage. Goyim!! Feh!!

So, despite thriving like almost no other newly arrived wretched refuse in capitalist America, the Jew’s allegiance to “One Nation, Under God” was and remains shaky. Jews discarded the ages-old individualism of faith in (and gratitude to) America and God and replaced it with a religious, rigid devotion to Social Justice, reform, championing The Underdog, fighting for The Victim, social engineering. Is it any wonder, Jews remain attracted to the comforting siren songs of Leftist doctrine & progressivism: equality, justice, change, hope. And still somewhat alien from, mistrustful of America. In the minds of millions of American Jews, to abandon their Leftism is to abandon their religion, to succumb to the ways of the oppressive White Christians.

It’s no surprise that with plenty of time and money in the 60s & 70s, Jewish Baby Boomers’ innate drive & ambition were channeled to bleeding heart crusades (and hedonistic pursuits) on expensive, prestigious campuses nationwide. They were the vanguard of a “New Left” that spearheaded the “counter-culture”; they sang of the glories of socialism/communism, then made tons of money in the corporate world, lived the Good Life in Hollywood & Silicon Valley as acquisitive Yuppies and Bo-Bos (bourgeois  bohemians) with expensive tastes AND, making nice “to society,” a slavish devotion to the cynical “progressivism” of the Clintons and Obamas.

With Obama’s deadly injection of Identity Politics and its foul rainbow of permanent victimhood, one could be rich, capitalist AND still claim spiritual kinship with the Wretched Of The Earth. This ideal Doublethink mindset has allowed rich (and Jewish) Wall Street & Hollywood celebrities to deplore lawful immigration and border control (limiting all those new potentially dependent Dem voters) while living Lo-guilt on their plush estates behind high walls and barbed wire.

Which brings us to the present generation, the New New Left, feverishly putting both avowed Marxists like (Jewish) Bernie Sanders and rabid Israel-haters like The Three Ugly Sisters at the helm of the Democratic Party. Both young and old Jews now find themselves cheering on those who would see them dead. Not a good plan if survival is the goal.