It’s been a bumpy ride and will continue to be. We are locked in a civil war between those who wish to preserve the Republic and those still gunning to “transform” it into Venezuela,  Sweden …or San Francisco. Rough stuff but well worth the agony. The scoundrels of the Left have shown they will stop at nothing to get their way, and the usual RINOs have been unexpectedly emboldened to shine. Thank you, Senators Lindsey Graham, Susan Collins, even Lisa Murkowski (whatever her ulterior motives) who abstained from voting “no,” voting “present” to allow the “yes” vote of absent Senator Steve Daines to register).

Aside from a more solidly Conservative Supreme Court, the most satisfying take-away is watching men like Kavanaugh and Trump stand their ground. Perhaps we are witnessing a real return to American principle, based on life, liberty and the pursuit of happiness, not the Marxist enslavement of banana republic handouts overseen by homegrown tin pot dictators like Obama, Clinton and their voracious, aspiring clones Warren, Harris and Booker. We would be remiss not to acknowledge aging harridan Feinstein for her part in turning the whole process of confirmation into a prime time witch hunt/inquisition for the whole country to witness. Thank you, DiFi/ChiFi!

One must accept that there is no bottom to the scummy barrel. For today’s Democrats, there’s always assassination, domestic terrorism from one of their loyal outposts like BLM or AntiFa. But for now, this is quite low enough.

In the meantime, Trump goes from strength to strength, schooling us on what it is to fight for what’s right. What an inspiration to watch real men in action. Almost Churchillian, perhaps history in the making, a living, present example to young men and women of what it means not to give up, to win.

The “transformers” have met their match in POTUSDJT, forcing them out of the murky shadows. Right man, right style, perfect timing. 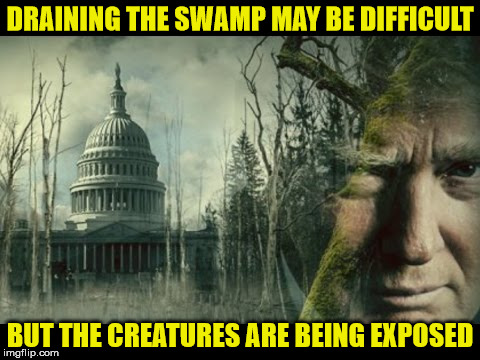 Remember how it started? And now we see how far they are willing to go. Behold the politics of personal destruction, Alinsky in action, the mob rule we can expect from now on from the intolerant Left.

God grant the November midterms reveal the extent to which decent people, heretofore undecided or even Left-leaning, have faced their own judgment error, have seriously deliberated…and are walking away.

As for the NeverTrumpers: they verge on complete irrelevance. Psychologists may debate the hows & whys of those so stuck in their gummed up psyches that they’ll never come ’round. Is it the financial and career perks of positioning themselves as “principled mavericks” a la McCain, currying favor with the Left, whoring themselves out as (temporarily) useful idiots for the MSM?  Are they so naïve to think they will not be tossed onto the nearest garbage heap upon expiration of their very short shelf lives as “conservative” renegades?

Most heartening of this whole debacle might be the clear support sane, adult women have given to Kavanaugh in response to the slanderous crimes perpetrated on him (and their sons/husbands/fathers/brothers). Perhaps the WORTHY hand that rocks the cradle will again rule the world. There is no greater reason for hope in our off-the-track culture.

Now that the dust of this conflagration seems to be settling, one must plan ahead and gird for the inevitable next assault. For starters, how about going on offense and attack the shameless hypocrisy of the principals: Hillary & Bill’s Foundation; the self-serving lies and fabrications of Senate frauds Blumenthal, Warren, Booker. There must be millions of average, decent apolitical citizens who probably would be genuinely shocked to admit such liars and frauds could be elected, honored stone-throwers in our political glass houses. On so many levels, in so many shameful incidents, let there be a reckoning. Our sense of a balanced, fair universe, a belief in right and wrong demands it.