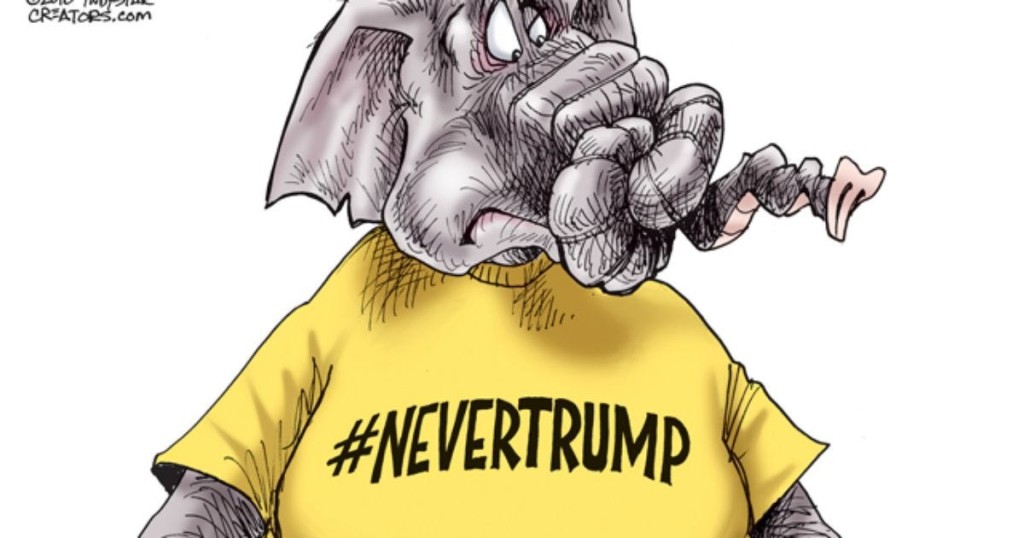 UPDATE 11/5/19: The sad truth about the Never Trumper pantheon with its trunk in a subversive twist: it’s really about the stock nosedive taken by Conservative.Inc. Playing nice with the establishment, getting invited to the right parties, making serious money as token stooge “Conservatives” in a Leftist world ain’t what it used to be.

ORIGINAL POST 10/27/19: Prig: “A self-righteously moralistic person who behaves as if superior to others.”

Many, many of us had our doubts. Donald Trump as President? America led by a flashy billionaire with a taste and style more-than-bordering on garish? Then, he started saying the things that we wanted to hear, and saying them with a conviction of someone unwilling to lose. On the contrary, his rallying cry was “Winning!” “Make America Great Again!” “MAGA!”

What Conservative opponent of the Obama/Clinton Master Plan/Fundamental Transformation  could object to controlled immigration; low taxes & minimal regulations for business, the one sure path to plentiful employment opportunities for minorities and the poor, lifting them up and out of their bleak urban ghettos; turning back ObamaCare and the advancing Marxist takeover of our lives it fronted; a Supreme Court interpreting, not rewriting, the Constitution; standing up to and even pushing back international bullies….?

What genuine Conservative could argue with any of that?

Actually, a lot of people who have called themselves Conservatives, Never Trumpers, all making their cases, expressing their doubts. Blessedly, as a credit to their common sense and sincerity, many have come around and now actively support the presence of a real Conservative movement. Perhaps they now realize that such an unprecedented (and welcome!) force of nature is all that stands between us and the Obama/Clinton plan for America.

And then again, there are those are those whom one could charitably call phonies and rank hypocrites. In the case of at least two prominent individuals, John McCain and Mitt Romney, we have witnessed blatant subversion from a pair of scoundrels driven mad with resentment over someone accomplishing what they could not. Power, not a thriving, free America, has been their aphrodisiac.

The Proudly Pompous PRIGade of Never Trumpers will always be with us, an annoying distraction, a buzzing fly left over from summer. The rest of us celebrate the growing prosperity of a Trump-led America, the recovery of vision en masse of greatness, winning life’s battles, fortified by liberty and freedom in all affairs, not the imposition of a fake “equality” designed only to seduce and enslave.

One Reply to “The Never Trump PRIGade”