UPDATE 8/18/19: On the 50th anniversary of Woodstock, today’s dewy-eyed Progressives still insist it was a triumph of harmonious socialism at work when, in fact, it was just another notable example of capitalism on overdrive. The music, the food, the PortaJohns,  even the admirable civility that got hundreds of thousands of baby boomers through a messy weekend were underpinned by countless deals and millions of dollars changing hands voluntarily between a hustling handful of canny capitalists. Does one really believe those multimillionaire mega-rock stars would have shown up without having already been paid their 5 or 6 figures? How would that stoned crowd have behaved if told their idols were no-shows? When food ran short, the local squares, predominantly conservative Christian Republican types, emptied their larders. Even the reviled military showed up like the heroic cavalry-to-the-rescue when medical personnel and supplies were running dangerously low.

For those of us who were there, the experience was exhilarating, but the smell terrible by the time Monday rolled around. We children of Depression/WWII era parents had their private (and individually paid-for) homes to which we could return, fully-stocked refrigerators, indoor plumbing and all.

Socialism? Shared wealth?   Quite the contrary. What wealth was shared was entirely the product of a free American market in which imaginative, ambitious individuals like our parents (and the capitalist concert promoters) thrived. Lucky us. Not-so-lucky those children of that dreamy Dem future doomed to the deprivations of Marxism.

ORIGINAL POST 11/30/17: Woodstock? Peace, love, music, the end of war and poverty and discrimination and unfairness and all unpleasant things, a return to the Garden of Eden.

Right. Followed very shortly thereafter by Altamont and preceded only a few days by Charles Manson’s Helter Skelter rampage. And now good old Charlie is gone, at long last off on his trip to hell stupidly delayed for decades by that same countercultural “Humanism” affecting the California legal system that temporarily outlawed the death penalty. It is that same “Humanism” which has made right and wrong vague, objective reality passe, wishful thinking mainstream and continues to curse us with Obamas and (almost) more Clintons. It is but one small foolish baby step for Humankind from heedless hippie “Humanism” to the fake “Humanitarianism” Hillary hash. Old manure, new bags.

And then along come Donald’s Deplorables in radical reaction to all that deadly “Humanism” still stinking up the place. We settled for gentlemanly Jimmy Stewart wannabes (the Bushes, McCain, Romney) who would politely oppose the scuzzy Lee Marvin Liberty Valences of the Democrats’ Permanent Welfare States & voting bloc Sanctuary Cities. Not exactly what the doctor ordered.

So, it’s come to engaging rough renegade John Wayne/Donald Trump to get the job done with his gun. Totally losing sight of ultimate goals,  Never Trumpers bemoan a certain coarsening of Washington style and yearn to be the noble eagles of principle soaring high above it all, going in circles, nowhere. The voters have opted for a grounded sturdy dirty dump truck to smash through that wall (and to follow through on building a shiny, modern new one on the Mexican border).

This week alone, two Donald-style Winnings in his sights: dredging up (and hopefully discarding) Pocahontas’ Consumer Fraud Bureau from the DC Swamp and a clear choice to move our embassy from Tel Aviv to Jerusalem in solidarity with Israel’s wishes, not the Palestinian Mafia’s. Domestically, internationally…winning is everything.

“But the point of a gun was the only law Liberty understood…The Man who shot Liberty Valence; he was the bravest of them all…” And the most outrageous…and funniest. Not to mention, effective. 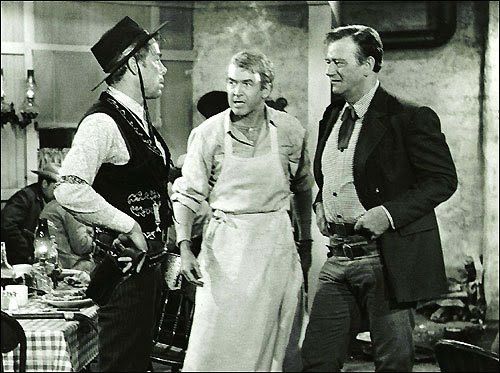