UPDATE 4/19/21: Using the old “family tragedy” playbook worn to tatters by the likes of his Dad and Al Gore (see below from years past), degraded human debris Hunter Biden goes the same phony sob story route. Some people have the Midas touch, metaphorically turning everything to gold. Some have precisely the opposite effect on everything they touch. (Rhymes with “it.”) Shameless and heartless remain the overriding words of significance. 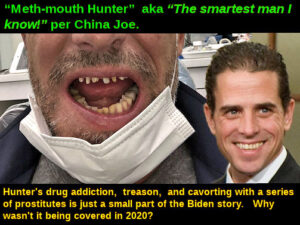 UPDATE 2/18/18: Pandering to all those potential new Dems otherwise known as illegal immigrants from Latin America, Nancy Pelosi puts fantasized words in the mouth of her blonde, blue-eyed 6 year old grandson, claiming that on his own volition his fervent birthday wish before blowing out the candles was to be brown like his Guatemalan friend Antonio.

UPDATE 11/8/17: Shamelessly still using the same old maudlin bait, Joe re-invokes the death of son Beau as a reason we should like him and elect him POTUS in 2020.

UPDATE 5/4/17: Comedian and late night host Jimmy Kimmel joins the Squawl of Shame club by prefacing a thoroughly ignorant pitch ‘n plea for ObamaCare with the story of his newborn son’s heart scare. When you’re a multimillionaire celebrity living in your own echo chamber bubble, one needn’t examine the consequences of government takeover of any industry. Why bother considering those thousands of sick Americans whose policies were declared illegal and canceled or about the skyrocketing costs nationwide of increasingly scarce policies?

UPDATE 3/10//17: And then there’s the latest shameless Dem hack, “Gold Star Dad” Khizr “Con ‘Em” Khan, exploiting his family tragedy in service to the Dem/Progressive agenda. The latest disingenuous slime from this Dem Party operative is fabricating a lie about travel restrictions supposedly imposed on him in the wake of the cruel, cruel call for rational enforcement of our immigration laws.  Unlike Gore or Biden, this one’s not running for office (yet) but like other lower-tier drones and foot soldiers in Chairman Barack’s Shadow Army, his son’s death in combat continues to prove useful to the American Left’s Long March to absolute power.

ORIGINAL POST 9/19/15: When it comes to acquiring power, politicians by nature outdo one another going after it. In the case of certain politicians, no means however private, unseemly or embarrassing are off-limits. For Al Gore and Joe Biden, invoking dead, dying or ailing family members is just one more surefire crowd pleaser and political stimulant.

Public Servant/Regular Guy/Boy Next Door Joe Biden just happens to stop by the hottest, most visible new Late Night show. His campaign rally kicks in with his host’s first sentence (“Everybody likes Joe Biden!” (Oh yes, Everybody!  More of the same from tender-hearted David Brooks below), then a quick denial/disclaimer that what is about to come is politicking (Of course not. Who would think such a thing?) leading right into the heart-grabbing red meat. Compare Colbert’s weepy Biden lickfest here with his demolition of Hillary the next evening.

This is all so cringingly familiar. Who can forget Al Gore’s “tearful” tribute to his dead sister, a lifelong smoker conveniently dead of lung cancer, the perfect poster-girl victim of the rapacious, very un-PC tobacco industry? Trouble is for Al, tobacco-growing was a political (AND financial) asset for him for some time after his sister’s death. Hear him boast about his purported hands-on experience in the fields:

One could almost smell the Alpha male, earth-toned blue-collar sweat pouring off him. At the 1996 Dem convention, it was all (badly acted) crocodile tears, no sweat, and any onlooker with the remotest BS detector winced at the shameless insincerity on display. Three years later assembling just the right team of hacks for his Presidential run, he hired a consultant responsible for ads opposing anti-smoking legislation. Let’s replay that tremulous vow made to a teary-eyed convention: “Until I draw my last breath, I will pour my heart and soul into the cause of protecting our children from the dangers of smoking…”

…with the appended unspoken proviso “…or at least the appearance of such so long as it helps my political career.”

The man is a serial, shameless hypocrite. In more recent years, it’s been all about drowning polar bears.

The really bad acting starts at 3:30.

…which brings us back to doofy, wand’rin’-hands Uncle Joe, now cunningly morphed into humble, loving Father Joe. “My son was better than me. He was better than me in every way…..I’m being completely honest. Nobody has a right in my view to seek that office unless they are willing to give it 110% of who they are.”

With his son Beau only recently buried, one risks being viewed as heartless casting doubt on Biden’s sincerity. Who dares criticize a grieving father? No decent person dares…except when the grieving father is callously capitalizing on his son’s death to gin up political support and sympathy for a Presidential run. And to be “completely honest,” he IS running! Of course, he’d never exploit his own family tragedies. And yet it’s getting out there. Against his wishes of course.

NYT smart aleck Maureen Dowd is obviously being cued by the Biden-For-Prez camp, probably Joe himself. [Nearly 30 years ago she helped smash Biden’s Presidential hopes with an expose about his plagiarism. Yesterday’s foe, today’s friend. Politics is like that.] Dowd’s highly suspect quote regarding Joe’s “indifference” to money and the financial perks of being Veep is particularly choice.  NYT PC (Phony Conservative and Dem lapdog) David Brooks has found another conniving Democrat’s pants crease to ogle: “His[Biden’s] discussion of his own grief over his son Beau’s death was beautiful and genuine and revealed the golden heart that everybody knows is at the core of the man.” Everybody? Golden heart? Are we talking about Joe Biden, the sneering bully on full display during his debates with Paul Ryan? Of all the things to write about in this troubled world, two of the NYTimes most visible columnists(and others) are singing the identical hymn of praise to Every Day Guy Joe Biden, in perfect harmony, publicizing private grief as the special ingredient.

Shameful is the word, a word that has long ceased to exist as a deterrent in today’s Democratic Party. Heartless is the word too, but that would be unkind, wouldn’t it? 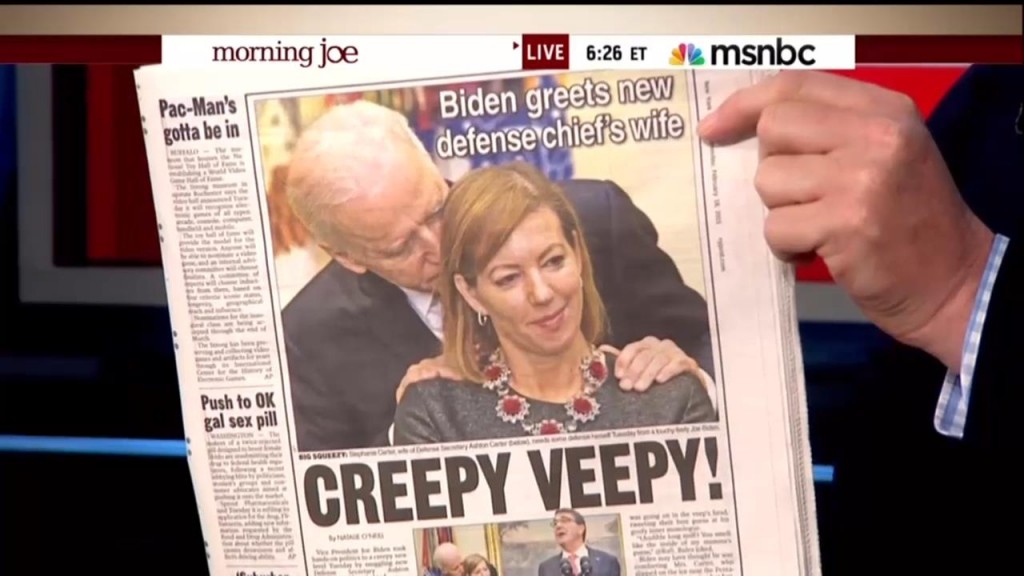 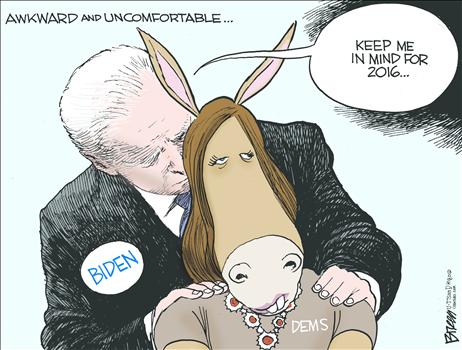 10 Replies to “Shameless: Exploiting your own family’s misery for political gain-
Gore…now Biden.”