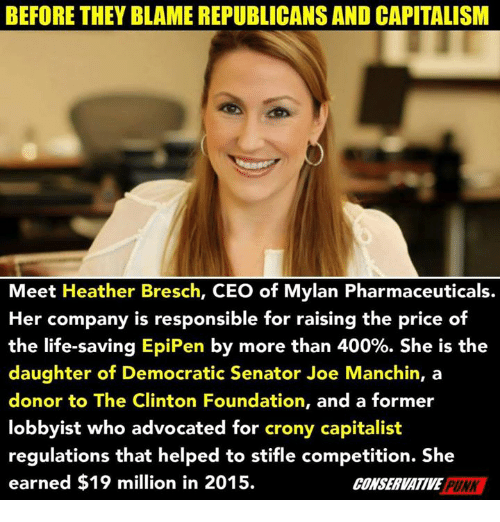 To those wondering about the consequences of a Clinton administration owned by a 1001 Clinton Foundation donors expecting special favors, we offer you the story of the Epipen. Here, a politically connected CEO of a large pharmaceutical company has managed to lobby Congress to eliminate all market competition to her company’s product. The evil, greedy Republican (of course!) capitalist pig in question is actually a prominent Democrat, Heather Bresch, the daughter of Democratic Senator Joseph Manchin of West Virginia, a heavy donor to the Clinton Foundation.

How can she do that? By lobbying the Federal bureaucracy to make her product mandatory in public schools and counting on federal red tape to keep competition at bay.  With potential competitors hamstrung by the FDA for years, even decades, Heather and her company Mylan can charge whatever price they want for their product, in this case, the now-classic epinephrine pen that millions of people severely allergic to bee stings, peanut and the like can carry with them to, literally, save their lives. It once cost dollars a dose. Recently, it’s been $600. Public outcry has brought it down to a mere $300/dose.

Capitalist, free market Republican greed? None of the above. It’s crony capitalism in bold letters, DC Democrats handing out favors to other Democrats willing to pay for favors, manipulating the markets and gouging the public in the bargain. Think juicy, exclusive contracts handed out by government-created “markets” like Obamacare or Al Gore’s Green Energy boondoggle or public schools required by law to stock Mylan’s Epipen, and we’re talking jackpot. Being the only game in town, Mylan stock skyrockets, Heather’s salary likewise.

Think ClintonWorld: all those corporate Foundation donors expecting special favors and market manipulation on their behalf. You ain’t seen nothin’ yet. Even Mrs. Bill’s loyal Hollywood following think this is a bad thing, but having their own stake in a Clinton presidency, they blame the greedy companies. Certainly not themselves or the redoubtable Ms. Rodham. And Hills knows that. Why do they do it? Because they can.

One Reply to “Welcome to ClintonWorld:
EpiPen, the latest in Pay-To-Play Crony Capitalism”