Warren Buffett, another one of Those Wonderful Men, termed as such by the clueless public bought off by what appears to be “compassion.” An uber- Capitalist supporting anti-Capitalist causes. How can that be? See Soros, George. Just another filthy rich CRONY Capitalist covering his Assets & image by funding some or the other Leftwing thing, all the while cutting huge Insider deals with politicos, raking in vast ill-gotten capitalist dollars while appearing to “care.” Mollifies them every time. For further verification, see “Gore, Al.”

In the case of That Wonderful Man Buffett, it happens to be the now-celebrated Keystone Pipeline controversy. Currently, Warren’s industrial railroad line BNSF has a corner on oil transportation from Up There Down Here. Losing that monopoly to Keystone competition would cost him billions. Is it any mystery why  Warren has been a hefty financial supporter of the ongoing Obama campaign (now in its 6th post-election year)? Wonderful Men like him simply go where the power is.

Now that the power has shifted and Keystone is likely to be approved by the Republican Congress, principled, Wonderful Man Buffett publicly supports Keystone! Crafty fellow. Maybe a new deal in the works? Fine with us. May the lowest best bidder win! That’s how it’s supposed to be when politicians/lawmakers aren’t stacking the deck in favor of their cronies, Wonderful Men like Warren Buffett. 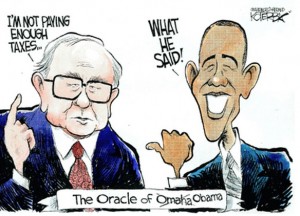 3 Replies to “That Wonderful Man
Warren Buffett-
The Keystone Connection:
Yet another lesson in Crony Capitalism”