UPDATE 9/27/17: Further exploding the myth of Norway As Utopia: its good points exist in spite of suffocating Nanny Statism, not became of it.

UPDATE 9/15/17: Norway displays an ominous weakening of resistance to its Muslim immigration problem.

Norway. Breathtaking scenery as dramatically beautiful as any place on earth. Historically comfortable thanks to its naturally replenishing supply of fish and lumber, and now rich as Croesus thanks to striking oil in the 60s. A visual Eden of five million beautiful people sitting on a trillion dollars. Free healthcare. So trusting and content a social atmosphere that no one locks his doors. Few if any guns allowed even for police  (to the delight of the maniac who, unimpeded in this model “civilized” gun-free society, took out scores of kids on that island a couple years back). Everyone is happy, every basic need met! 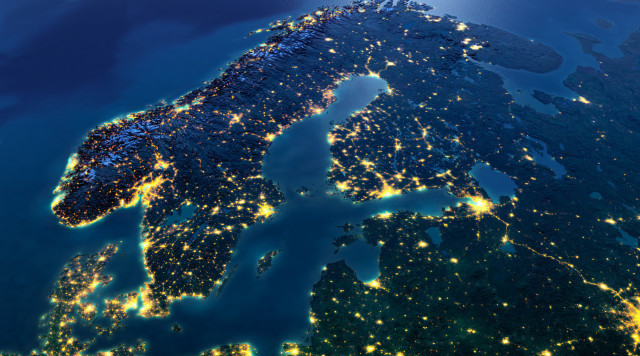 It sounds like paradise and blithely touted as The Ideal by Democratic Socialists everywhere like Bernie and his followers, the perfectly planned society.

The perfectly planned society…therein lies the rub. Do humans thrive best when all the amenities of life are simply there for them, cradle to grave? And does the plan actually provide the greatest good for the most people as claimed?

What is missing from this rosy picture? For starters, there’s that little problem of rationed goods and service, an inevitable result of restricted markets and wage controls, all leading to stratospheric prices. Supply and demand? Naturally competitive, fluctuating prices determined by producer and consumer, one transaction at a time? Nah. Big Brother and His Master Plan can do better.

Who can afford a night out in Oslo when a shared pizza washed down with a couple of beers costs something on the order of $50? Compare the cost of living in Seattle or Denver, two cosmopolitan American cities with roughly the same population (700,000) as Oslo. Such a disparity (in the American cities’ favor) does not include the laughably high taxes levied on virtually every Norwegian income. Worst of all, there’s that certain deadening effect of compulsory entitlement on human beings universally better off dreaming, working and competing as individuals (not socialized clones) in a thriving free marketplace. For all of Scandinavia’s highly touted way of life, there’s a terrible cost to living for “free.”

All that explained, evidenced by hard, objective reality, the Socialist Dream still has Leftists worldwide singing the praises of having “all basic needs met”: housing, medical care, food, transportation, a job with a “living” wage, etc. etc. Thus provided for, we are assured that the creative, the artistic, the deeper yearnings of the human soul can soar, no longer bound by economic need and the struggle to survive. Remember Nancy Pelosi’s pitch to young artists-to-be about how ObamaCare would set them free to quit their jobs to paint and compose? (Never mind that the vast majority of the young never even think about going to a doctor until they’re well past 40. And what about the novel idea of a tax-deductible Health Saving Plans and a competitive insurance market offering reasonably priced policies for anyone needing medical care?)

This dreamy narrative is somewhat spoiled when presented with the nightmarish incidents surrounding two of Sweden’s most internationally prominent artists, filmmaker Ingmar Bergman and “Pippi Longstocking” author Astrid Lindgren. Both found themselves on the wrong side of the Nanny State’s tax collectors. What? Trouble in Paradise? In Bergman’s case, he was driven to a mental breakdown and 7 year exile from the country. In Lindgren’s case, her income was taxed at the most non-utopian rate of 103%. Imagine the problems encountered by Little Mr. & Mrs. Nobody.

For more evidence regarding the inevitable failures of a perfectly planned society despite bountiful natural resources, one can refer the Leftist skeptic to the happy travails of oil-rich Venezuela which can’t even provide toilet paper for its people. Please don’t bring this up with Bernie Sanders.

For a somewhat more successful model of a socialized society, there’s Switzerland which has of late shown the wisdom to leave businesses less severely taxed and free to fail or succeed as the market decrees. Predictably, when taxes are relatively low and businesses can thrive unimpeded (without special favors from politicians), there are jobs, there is dignity, individuals are saving, building, realizing life dreams for themselves and their families. Then life is genuinely good.

And as much as the self-hating American Left loathes admitting, there’s always the  wicked United States which, reputedly, has provided a pretty good way of life for a lot of people when individual initiative, entrepreneurship and markets are allowed to thrive without undue regulation, taxation and coercion.

With Obama, the Left has had its turn (once again) in getting Marxist Transformation right this time. The blessings of this new foray into Communism With A Human Face includes increasingly ugly civil unrest fueled directly from above, record unemployment, record personal and national debt, an exploding Culture of Dependency. Small wonder why the grassroots, both Dem and Repub, are rooting in record numbers for brash political outsiders, one a Red Relic from the 60s offering the old Marxist manure in biodegradable burlap bags, the other a blunt, business buccaneer with orange hair  who wants to turn us into a nation of winners again, not losers.

Taking Donald at his word, life, liberty and the individual pursuit of happiness seem to be making a comeback…in word and hopefully in deed.

The alternative is more of us living on the Democratic Party plantation, our masters the politicians graciously doling out Other People’s Money to us.

Bring back low taxes, limited regulations, free markets, controlled borders, strong defense of Americans everywhere. America still remains The Model, not Scandinavia.  The Left will never emerge from its delusion despite the fact that it is capitalism, not “democratic socialism” that provides the greatest good for the most people.

5 Replies to “Why Norway (and the rest of Scandinavia) is NOT paradise on earth despite being gorgeous and rich, rich, rich!”