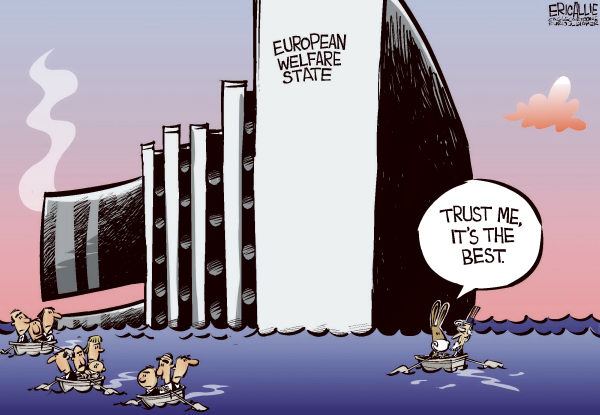 Are Greta The Grinch and reality taking some of the fun out of being a Democratic Socialist paradise? In addition to Climate Change madness, Europe is reaping the vicious whirlwind of Open Borders, most specifically millions of Muslims walking right in and cannily gaming the social welfare system to near bankrupt overload. The attendant explosion in Swedish crime from an invading culture that refuses to assimilate is the harsh reality. But for the Progressive mind-bent, better just to pretend everything is beautiful blondes, sparkling fjords and an endlessly bountiful Treasury.

All those touted benefits of nationalized healthcare and energy, the source of the fabled Golden Goose of all socialized life, all those golden eggs of free stuff? Exorbitantly high taxes drawn from a free marketplace, entrepreneurial individuals working overtime to sell their millions and millions of indispensable goods and services at a profit. Also known as (if you’ll pardon the expression) capitalism. Without its villainized capitalist sugar daddy, the socialist grift is over. But don’t tell Pocahontas, Bernie The Red, Hillary, the Obamas, and especially the shortsighted electorate following them over the cliff.