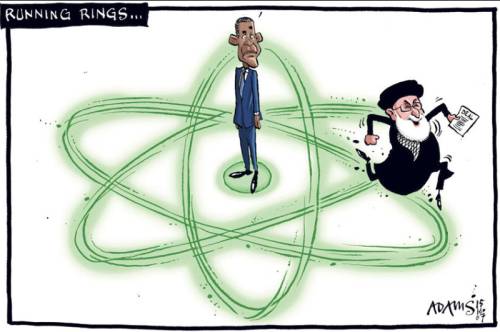 UPDATE 12/23/17: Obama calling off investigation of Hezbollah drug trafficking in pursuit of his stellar “Iran Deal?” The jaw can drop no farther as time passes and more is revealed of Obama’s obvious sympathies for anything anti-American Third World. The parallels to a “naive,” “misguided,” “appeasing” Chamberlain become more and more strained. The scandal that was, is and always will be Barack Obama only becomes more apparent with each new undeniable revelation. But don’t expect any contrition or second thoughts from those, high and lowly, heavily invested in his ongoing sainthood.

UPDATE 7/1/7/15: Kerry/Obama’s Iran Folly now laughably being celebrated as Nobel Peace Prize-worthy. For the minimally rational concerned with the preservation of Israel and our own American civilization, “Suicide Of The West, 2015” is more like it. How could this happen? Look no further than Useful Idiot, smug (Jewish!) media mouthpiece and all-round fool Andrea Mitchell rolling her eyes as she shares the hilarity of Netanyahu’s concern with her high-level Iranian interviewee. He’s smiling too…at her, not with her. Likewise, the joke’s also on Beloved Leader Barack, Iran’s new BFF and latest new crush. He always falls hard for anyone who hates America.

Lacking any or all allegiance to the country that elected him President, Obama identifies entirely with the primitive, barbaric cultures of the Old World. Comparing Obama to Chamberlain? Unfair to Chamberlain.  America, to Obama’s mind, is the world’s villain. What else makes sense of his indifference to the squashing of human freedom by Iran and Russia?