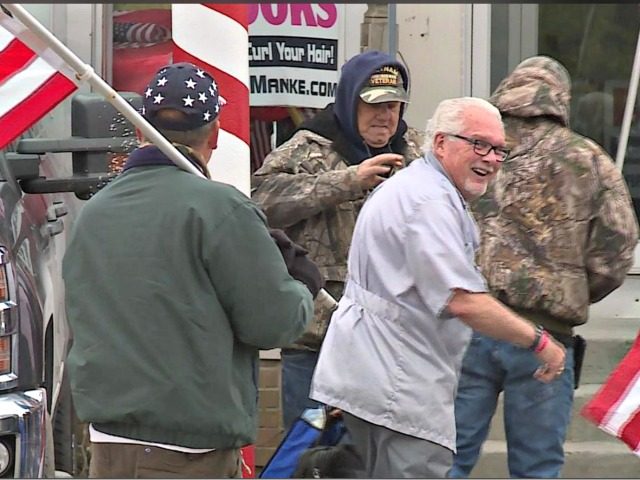 UPDATE 9/8/20: Some of us knew in the beginning (see the original post from months back below) this unprecedented shutdown of the world’s motor on the advice of a few suspect “experts” was one of the most outrageous mistakes in recorded history. For future reference, let us hope the freedom-loving, rational public realizes it is one of the biggest crimes ever committed. How else to view the loss of life, liberty, property and the pursuit of happiness for millions but as the ultimate violation of the most fundamental human rights?

UPDATE 5/17/20: Michigan defiance has the feel of Poland’s Solidarity from 30 years back. Enough people say no, and the abusive powers-that-be can pound sand.

UPDATE 5/12/20: A 77 year old barber from Owosso, Michigan (love those quaint Midwestern town names!)  named Karl Manke becomes the latest American who REFUSES NOT TO WORK despite threats and fines from the Badger State Mafia headed up by Nurse Wretched Gretchen. In such a revolutionary act, the Left delves deeper into despair over the resumption of normal life, citing the usual humanitarian concerns over people dying…and just incidentally, the likely re-election of Trump due to a thriving economy. The previous three words (“a thriving economy”) herald the suicide of the Left. Total shutdown and a 21st century Great Depression remains their great hope. The rest of us want to go to work, pay our bills, take care of things and those depending upon us, business as usual, to live. But live and let live has never been the M.O. of the Left, has it?

ORIGINAL POST 5/10/20: With all due respect and concern for those suffering from this virus and the health workers daily threatened with infection, the most lethal poison afloat in the air these days is the yen  people have for destroying free, moving life, within themselves, and all about them . Shared misery is the compulsion of the chronically miserable, and by sheer numbers, it is no exaggeration to state that we are currently witnessing one of history’s most astonishing outbreaks of  imposed mass human misery. No bombs. No noisy violence or overt bloodshed. Just the quiet, asphyxiating edicts of Big Government forcing its ill will on The People.

With good reason, one could say this fiasco takes the prize as human history’s stupidest, biggest, most costly mistake. When within memory have the most essential processes of healthy life been suddenly stilled on this vast, worldwide scale?  All on the suspect advice of “experts” who are nothing of the sort. Just mediocre, corrupt phony humans with fancy titles. Who, coincidentally, hate Trump.

It never should have happened. Minus the ginned-up hysteria, healthy life would be going on as always while REAL medical science could be working its wonders in solving the eternal challenges of disease. Trust legitimate science and scientists, protect the naturally vulnerable, test for immunity and let the world go on. Instead, we are reaping the whirlwind of a gigantic hoax.

Can one draw a better picture of the folly of it all when the most prominently pious preachers of compulsory face masks and “Stay Home”-the Obamas, the billionaire Illinois Governor Pritzker-decide that such restrictions and civic duty apply only to the Little People, not to them?

Most outrageous of all is the high hypocrisy of one Neil Ferguson, the British Ground Zero architect of Shutdown,  on whose “expertise” this economic suicide is based. Turns out this august scientist has been carrying on heavy-duty hands-on research in  a highly active cross-town affair in locked-down London with his married, open-marriage mistress. But the rest of us are expected to observe sacrosanct “Social Distancing” and stay chastely quarantined. On the advice of this phony cad, millions of lives have been unnecessarily ruined. He has now been dismissed from his high position and will be remembered by a most ungrateful posterity as Dr. PantsDown. God bless the British tabloids.

This can only be amusing to those of us lucky enough to be untouched by it all. To the less fortunate, those suffering profound depression in forced isolation, the depleted savings, the loss of work, future plans in ruins, it is tragedy. What of a whole nation of a billion souls like India, in recent decades on the rise with an emerging middle class based on newly acquired high tech training and burgeoning international business, now suddenly sucked back into mass poverty and famine? Ruined…for roughly 2000 deaths from The Virus. One is expected to defend such cold numbers by assuring anyone listening that 2000 deaths is a very bad thing for those 2000 individuals. But concern for those thousands of lost lives is empty if the price is millions of ruined lives and the destruction of society as a whole.

The bad news is endless and extends from wrecked lives to the fools who still insist this has all been for the good and wish for only more of the same. There are those on the political spectrum who will forever identify themselves with Big Brother/Big Government, the safe, guaranteed life for all, whether the rest of us want Big Brother’s “help” or not. There is no hope for them, and they will continue to drive more of this down everyone’s throats. For them, freedom is overrated, and ice-cold security the goal. Naturally, the rest of us are expected to follow suit.  Conscious or not of the damage they do, their presence must be acknowledged as the destructive parasites they are and forever pushed back. They are not going away. As nations must always prepare for war from outside, so must freedom-loving citizens be prepared on a daily basis to face down our fellow Americans who would rob us of our most basic rights.

Leaders on the Left speaking for this part of the American electorate know that a newly awakened public will not come out for them in sufficient numbers in November, particularly for a bumbling fool like their chosen candidate, Sleepy Joe. For obvious reasons, their final choice of candidate remains a bit mysterious. So voter fraud is the focus. Note their single-minded campaign amidst this chaos for mail-in, absentee voting. How better to steal the election?

Superseding corruption and stolen elections, the primacy of work and earning one’s own way must regain traction and take permanent precedence before the tempting offers of Big Brother. Hopeless, unemployed dependents are the oxygen and core of the Left’s constituency. May those countless millions of individual lives devastated by this madness look not to Big Government but to where  real hope resides, in the genuinely good news of American regeneration. 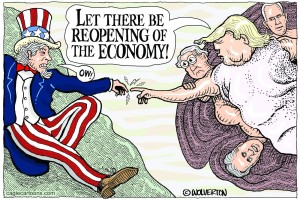 The good news is people like Shelley Luther, the Texas hair salon owner who has simply REFUSED NOT TO WORK despite the intimidating, arbitrary ruling of a local corrupt judge. Luckily for her, the good guys have paid attention, and she is free, along with those she employs, to work and live. Those lives are back on track where they never should have been forced to leave.

The good news are those truly decent people in law enforcement who have refused to follow the evil orders coming down to them from the bureaucratic chain of command. We salute the stand-up guys like Maine Sheriff Scott Nichols  and those like-minded California sheriffs and New York cops, all fed up with being the thuggish stooges enforcing the false Gospel of Social Distancing. Unlike their superiors barking these authoritarian orders, these are the common sense salt-of-the-earth who define the clear line between law enforcement and police state terrorism. They are the good news.

More good news are those joyful flotillas of boaters celebrating their prosperity and the resumption of life in free states like Florida boasting sane, honorable leadership.

Dr. PantsDown, the dehumanizing masks, Nancy-Antoinette Pelosi and her ice cream: let it all be a warning for the inevitable next time when We The People are faced with the forces of Big Government interfering in our lives like the busybody control freak Church Ladies they all are. 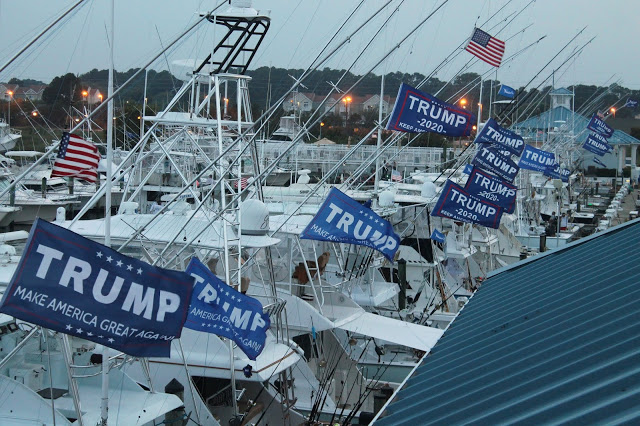 11 Replies to “Americans Refuse Not To Work!”