UPDATE 8/16/17: Prager has prevailed and has conducted to a full house. The totalitarian bigotry of the PC Left continues unabated on a daily basis, but it can be confronted and overridden one fight at a time.

The self-appointed avatars of “culture” are outing themselves as the bigoted, suicidal fools they are, even at the expense of their own survival.

A Broadway show is about to fold because of low ticket sales; the management decides to hire a box office attraction to keep everyone employed. Amazingly, those who stand to benefit from this sensibly conventional move decide it’s their turn to sound off and have their 15 minutes of Progressive relevance and righteous notoriety.

The Problem: an unknown Black actor is to be replaced by a well-known White actor (Mandy Patinkin) whose presence will sell tickets…and provide salaries for the same brainless fools protesting that which will continue to provide them employment. The weak-kneed Patinkin himself withdraws in capitulation to and support of his fellow PC Progressos. Presumably, he doesn’t need the money, and he has saved face with those fellow “idealists” he thinks are his fan base. Actually, he and the rest of them look like narrow-minded dunces. When one insists on finding “hate” and “bigotry” and “racism” in places where they simply don’t exist, things tend to backfire on these boys and girls crying wolf one time too many. Who can ever take any of them seriously any more?

On the opposite coast in Leftist La-La Land, some college professors/volunteer musicians, similarly marinated in modern PC orthodoxy, raise a hue and cry  over the efforts of their community orchestra to raise much-needed funds by inviting a celebrity to conduct a benefit concert.

The Problem: the celebrity is White (!) and Conservative (Dennis Prager!!!). Again, raising the same old false, baseless cries of “bigot,” “hater,” “racist,” “homophobe,” this handful of rabble are effectively scuttling an opportunity for their orchestra, about which they care so much, to raise money. Being passionate “resisters” is more important. Same old, same old. Stuck on stupid.

Not by chance was Hillary’s infamous Deplorables screed delivered to a room full of the Left Coast’s most Elite Leftists. Lower down in the Marxist Mafiosi’s pecking order, low IQ actors and snarky college professors revel in mimicking Hillary’s contemptuous message of intolerance by boycotting Dennis Prager and Mandy Patinkin. No doubt this makes them feel very “involved” and righteous, the irrelevant rabble of “the resistance,” desperate to be relevant.

What has been accomplished is excellent exposure of the Left’s complete intolerance for free speech, free association, open debate. Contrast their insistence on silencing, isolating, boycotting, quarantining Prager with Prager’s own invitation to the principals onto his radio show to discuss things openly and publicly. Would such a gesture ever be reciprocated? Never.  True American values make room and every allowance for the PC Left while the PC Left exists solely to silence any and all opposition to it. In squelching dissent, these people feel free to go about their fundamental business of Community Organizing everyone into servile, dependent Victim Identity groups. Even to their own detriment.

Other examples abound. In yet another “entertainment news” medium, Fox News has routinely made a point of hosting contentious guests from the PC Left. This has made for interesting viewing, high ratings and, to the Left’s dismay, a lively free exchange of opposing ideas. That is not to be the case any more as Fox appears hell-bent on purging (through public humiliation) its driving Conservative figures (Ailes, O’Reilly, Payne, Bolling). Ratings suicide, anyone?

Apparently for the Left, having your enterprise fold financially is preferable to granting even a molecule of oxygen or square millimeter of space to anyone other than Barack & Hillary voters in their highly selective Rainbow/MultiCultural “open” tent. Deplorables need not apply! 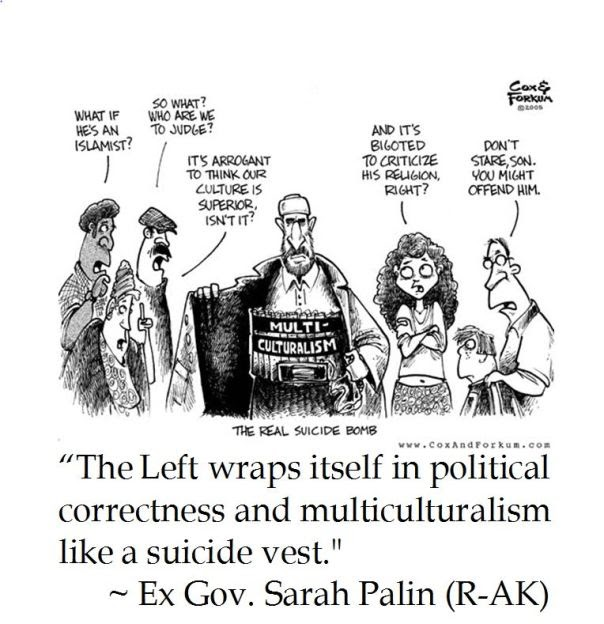 One Reply to “The PC Left eats itself (again) on both coasts.”