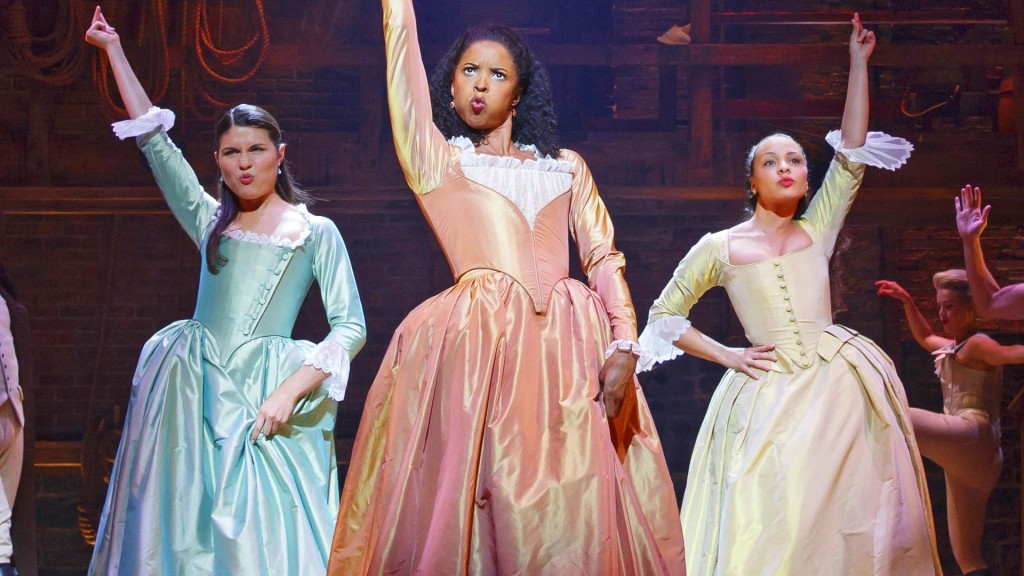 UPDATE 6/25/21; When Lin-Manuel Miranda and other chic Progressives hail “inclusiveness,” the rights of “ALL THE PEOPLE” as he repeatedly describes it, they are really EXCLUDING anything or anyone they don’t happen to like. Seems that people like him aren’t content with equality but actually crave absolute power and control, and dissent is decidedly unwelcome. Those vying on the Left for that total control tend to eat each other in the end as nicely demonstrated by Miranda’s groveling before his Wokester comrade/critics decrying non-“inclusive” casting for his latest film. As said in my original assessment of “Hamilton,” “inclusiveness” definitely has its limits with these people.

UPDATE 7/13/17: Selling multiculturalism and rewriting American (and its own) history at Harvard takes a canny cue from “Hamilton’s” use of gangsta rap gimmickry. “Inspired by ‘Hamilton,’ they say they have the goal of ‘re-inventing [their] past to meet and speak to the present moment.’” Mao, Stalin, Ceausescu, Pol Pot and all totalitarian tyrants selling the utopian Year Zero concept  would understand completely. Orwell certainly would.

After running for 18 months, the hip-hop musical “Hamilton” is still probably the hottest ticket on Broadway with prices ranging from ridiculous ($100s) to certifiably insane($1000s). It is the latest self-congratulatory (and immensely profitable) sensation putting huge amounts of cash into the pockets of the Limousine Liberals and Champagne Socialists behind it while doing all of ObamaNation proud.  It has been described disingenuously by its creator Lin-Manuel Miranda as  “…an old time-y Broadway musical dressed up in the music we grew up listening to and loving.”

Actually, it’s old-timey digested Americana, period-costumed episodes from the life of a Founding Father, dressed up in the Ghetto Radical Chic of multi-millionaire Gangsta Rappers and their cynical, even richer promoters. There isn’t much mention of “bitches ‘n hoes,” but an occasional expletive is thrown in to keep things at least a little bit edgy. Like most Rap, the sound is as pleasant as rapid gunfire minus earplugs, the grade school rhymes delivered break-neck and often undecipherable. There are a few moments when things are tolerable, even entertaining when the performers sing a quiet ballad, the blues or in boogie rhythm. Mostly, it’s an assault on the ear and eye: men and women in colonial dress spitting out ugly sound and affecting the in-your-face, jerky Rap gestures/grimaces of trendy Inner City ghetto walk ‘n talk.

Yes, American cultural tastes have always varied (as they should), and all of us should be free to pick and choose and shell out dollars accordingly. Hooray! Live and let live. Different strokes for different folks.

What offends is the pretension that this “Hamilton” hoopla celebrates Hamilton’s (& Washington’s & Jefferson’s) America with its precious privileges of free choice, tolerance of genuine diversity, free market capitalism, private property rights providing opportunity for all; we’re a Constitutional republic! In truth, this “controversial” theatre piece exploits that freedom, riding safely in on Obama’s hateful wave of Identity Politics and phony multiculturalism. Integration, assimilation, equal opportunity, a nation of free individuals have been declared by the former Prez and his flock of transformers “not good enough.” There is a great deal of money and power to be accrued and maintained from this permanent rancor, resentment and revenge. And “Hamilton” is just one more major contributor & profiteer in this deliberately created turbulence.

Cunningly, the play’s “patriotic” script/message is quite bland, unobjectionable,  no Marx or Michael Moore within earshot (unless lost to these ears among many inaudible words). “Hamilton” never would have reached Broadway and subsequent acclaim without the gimmicky medium of rancorous, resentful, vengeful Rap. The medium of today’s street talk ‘n walk is most emphatically the message. With that single Radical Chic touch, the intelligentsia, the Tony committee and the sheeple have gone all swoony.

Remember when a “Hamilton” casting call went out “seeking NON-WHITE men and women?” Imagine the uproar had a similar call gone out for “whites only.” This is a production celebrating “diversity?” They should also have specified “…who would NEVER vote for Trump.”

And then, there’s the infamous lecture (penned by Miranda) on “American values” and “diversity” delivered with supreme arrogance from the stage to newly elected Vice President Pence, in attendance:

“We have a message for you, sir. We hope that you will hear us out. Vice President-elect Pence, we welcome you, and we truly thank you for joining us here at “Hamilton American Musical,” we really do. We, sir, we are the diverse America, who are alarmed and anxious that your new administration will not protect us, our planet, our children, our parents or defend us and uphold our inalienable rights. But we truly hope that this show has inspired you to uphold our American values and to work on behalf of all of us. All of us.”

All of us? Really?  “All of us?” In Leftist parlance, that means “All of us who spout the PC Party line which excludes anyone who didn’t vote for Hillary or Barack.” In ProgressoWorld, diversity, tolerance, upholding the “inalienable rights” for “all of us” pointedly excludes racist, xenophobic, homophobic “You name it!” Conservatives. Miranda & Co.’s message is addressed not just to Pence but to all of us Deplorables. We have been judged and found guilty by virtue of not being One Of Them. “All of us” has its most definite limits.

The last election was a response to this annoying contempt: we don’t need the “inspiration” of your trendy Rap musical or predictable PC to “uphold…American values and to work on behalf of all of us.”

To Miranda and his pals intent on turning us into a permanently whining, warring nation of victims and oppressors, one must turn the tables: you’ve had the last 8 years and then some. The burden of proof is on you, not us.