A perfect new image, an everyday-people-sort-of-homey trademark/logo for the Czarina-in-waiting. Russian yellow cake from an old family recipe passed down to Her from those heretofore unmentioned immigrant grandparents hailing from the Siberian steppes or somewhere Over There. Maybe Grams & Gramps were from Nepal where she got her name, thanks to Edmund Hillary. Or maybe Bosnia where she barely survived that wild sniper fire attack at the airport. Or maybe the recipe was in one of those “personal” emails from her wedding planner/yoga teacher/mortician. Or something. Whatever. 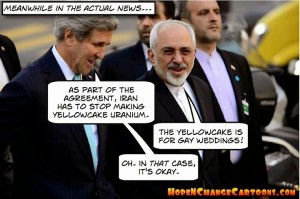 Maybe when she made the “Yellow Cake” deal, she thought it was Betty Crocker mix being shipped en masse to the starving Russian rabble. Lady Bountifuls like Evita, Michelle-Antoinette and Hillary are “champions of Every Day People” and are prone to do nice things like that. Except when they don’t and merely get rich and powerful pretending they’re the Keepers of the Kingdom…and generous dispensers of the Royal Treasury.