Remember Tennessee Ernie Ford’s lament “St. Peter, dontcha call me ’cause  I can’t go; I owe my soul to the Company Store”? Company stores were the only source of basic goods available to employees in 19th & early 20th century industrial towns.  Having no competition, price gouging was commonplace, and credit offered against wages to helpless employees left many an indentured soul permanently “owed to the company store.”

The extraordinarily positive response to POTUS’ uplifting SOTU speech made this writer think of the Democratic Party as the Big Gov company store monopoly that for generations has laid sole claim to millions of confused, trapped, owned souls. Could it be we’ve reached a fork in the road where those already entrapped or those about to be really see an alternative? Is that evil monopoly happily facing ruin as its formerly indentured serfs are finding a way out to provide for themselves? Note the reaction to Trump’s repeated use of the horrifying term “America” that made the ACLU and virtually the entire Dem half of the room go postal. Could it be the cherished Dem project of unmooring people from their real roots, the freedom to pursue the American Dream, is being thwarted? To quote the President’s speech: “Americans are dreamers too.” Uh oh. That’s putting America and Americans first, and that runs seriously counter to the “global” mindset put in place during the glory days of Obama Transformation.

As our economy is set free of crippling regulations and taxes, business is coming alive again and jobs with it. The real hope for our country is that the average Joe and Jane, once tempted to swallow the lethal hook of Big Gov dependency, are finally making the connection between a free market and their own very real potential for prosperity…and independence…and self-sufficiency…and security…and satisfaction…and dare we say it, happiness in this tough life.

For a formal retort, the hapless Dems can only cough up another vacuous Kennedy hairball vowing to “fight for you;” and that’s the way it’ll be for keeps so long as people are kept poor, dependent, weak and unable to fight for themselves.

The Dem derangement is hydra-headed, but their single-minded dedication to boosting their voting rolls with illegal immigrants trumps all. Their singular goal and only means of survival is permanent mass dependence, squelching all possibility for the free individual to rise.

Of special note is the Dems’ much touted compassion for Blacks taking a back seat to illegal immigrants on their big agenda. Witness the blatant refusal of the entire Democrat delegation present (including the Black Congressional Caucus) even to acknowledge the parents of two Black girls murdered by savage M13 gang members (made up mostly of foreign illegals). Take it in: illegal immigrant murderers take precedence over murdered Black American children!  Is further proof necessary that Blacks/Gays/Women/ID Group Of The Week are worthy of concern ONLY if a member of said Victim Group can be herded into the Dem branding chute? Why mollify Blacks who they think are already in their pocket when they have the chance of luring in all those millions of new Dem illegals? When will the poor fools taking the Dem bait realize that the protection racketeers-Barack, Hillary, Nancy, Cory, the Kennedys, the whole bunch of frauds “fighting for you”-demand a little something in return, starting with voting early and often when told. Stay on the plantation, kiddies, do what you’re told, and the crumbs will continue. 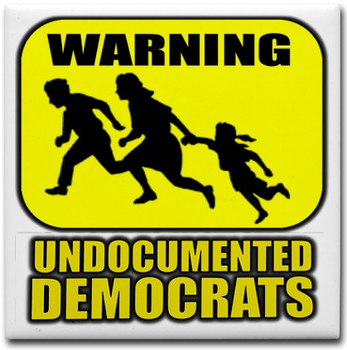 Clearly, the most feared daylight meme threatening the Progressive vampires is the concept of America. And the startling rise of Donald Trump.

God forbid that something positive unites us…like being Americans in the great, heroic sense. Let the Trump revolution continue.

More of great, good cheer and guffaws to come.