And where do jobs and prosperity come from? The free competitive marketplace. But Hill & Co. have a different answer: Herself, Them, the Elected, exalted stewards of all those ill-gotten tax dollars we’ve earned and should happily hand over to Them for proper distribution. Forget about jobs, work, all that inequality and unfairness! You’re entitled to all the basics of life! We’re here to provide it for you, courtesy of all those rich One Percenters (present company excepted). Just vote Dem.

Hasn’t someone pitched this one before? And hasn’t it turned out rather badly for all those giddy ObamaTrons?

DEMO MILLIONAIRES CLUB, Shirking Class Heroes, bane of the odious 1 Percenters (aka Anyone Who Actually Works) 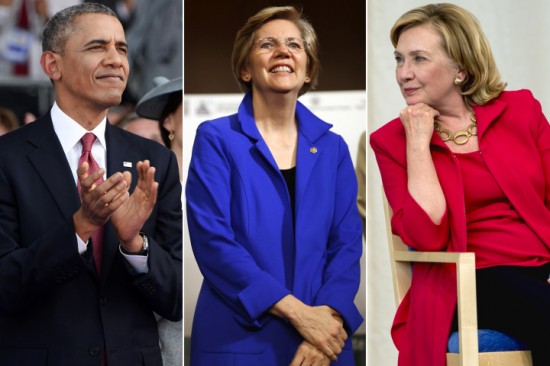 No matter. The masses keep going for it, Hoping for the Change that never comes…but does come when living by the premise that hard work and persistence literally pay off. Granted, if those millions of dependent Dems lived by that premise, Mme. Secretary & The One & Lie-awatha would have to be out there foraging for honest work themselves. And that wouldn’t be fair and equal, would it?

4 Replies to “Hillary, Lie-awatha & Barack: “You Didn’t Build That….”
Translation: “What’s yours is ours. What’s mine is mine.””