At age 10, I became entranced by Aesop’s Fables and the simple lessons each provided. I wanted to be good and wise because, without actually verbalizing it, I knew even then I was always veering toward bad and stupid. Being a child of the Judeo-Christian tradition, I realized I would never be completely perfect (alas!); and sadder yet, the world and the people in it were all rather imperfect, albeit magnificently blessed with seemingly limitless possibilities,  ideas, talents: history, music, art, science, books, movies!!! Not to mention the opportunity to choose freely among them, running wildly from bin to bin, the kid in the candy store. It was (and still is) a comfort knowing that, with my strong tendency to swerve from the straight-and-narrow, there were always those learned guidelines now internalized to bring me back, like automatic pilot constantly righting one’s off-course direction. It took a while, but kept on course, I eventually found I could partake (reasonably) guilt-free of the possibilities of life.

As I enter this late phase of life, that deeply rooted personal freedom and ongoing determination to nurture and protect it is the one thing that continues to allow me everything I value and make life satisfying.

Can a present-day kid boast the same secure inner guard rails for the passage through life? Does a sobering percentage of so-called “adults” have those built-in corrections in place? Apparently not, judging by the scary numbers of people attracted to the beguiling siren song of  totalitarian Big Brother Government, benignly dispensed as “democratic socialism.”

The much-missed President Reagan had the golden gift of delivering simple, kind messages, the best of which from a political point of view was this: 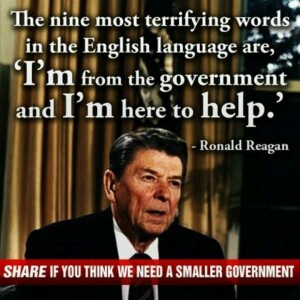 What some of us realize is that those 9 words are rooted in the 7 Deadly Sins which, taken in the following order, provide an uncanny look into the progression of universal human frailty and the ominous slide of millions toward Equal Outcomes and Guaranteed Everything: Sloth, expecting The Good Life without earning it; Envy, coveting the Good Life experienced by others without the obligation to earn it yourself; Lust, the awakened desire for unearned power; Greed, tasting that unearned power and wanting more and more; Gluttony, gorging on greed; Pride, a self-inflated sense of entitled importance and unearned power over others, synonymous with the Greek hubris; Wrath, the will to destroy those who stand athwart the desire for unearned power over them. Pride, along with the rest of the intertwined others, goes before The Fall. 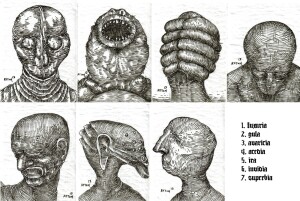 We stand at a crossroads, but then we always do when negotiating our way through this flawed, challenging, often dangerous world. As a nation, do we possess that magnificent gyroscope-in-place that will allow the correction needed to go on, peacefully, as a free people? Or are we on the verge of escalating to real war, itself an historical correction with many, many regrettable precedents? Beyond a certain point of our efforts and those of our chosen representatives, it’s all in greater, more powerful hands than mere humanity can provide.

8 Replies to “The 9 most terrifying words, rooted in the 7 deadly sins”