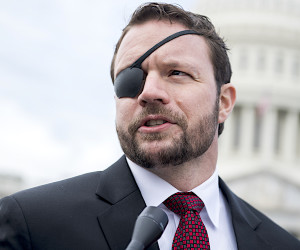 UPDATE 9/25/20: Crenshaw continues his rise as one of the best hopes for post-Trump America and Conservatism. This remarkable ad in which he is one of six Texans on the ballot is one of a number of masterpieces leading up to the election, each one irresistibly infused with love of country and true American spirit.

UPDATE 4/26/20: Dan does himself and Conservatives proud in his calm, clear gutting of the execrable Bill Maher and his monotonous Hate Trump/Hate Republicans drone. For some discerning senses, telling the truth the Crenshaw way is The Antidote to the repetitive sewage river coming our way daily from the Left.

ORIGINAL POST 5/12/19: The struggle to maintain a calm, clear head dealing with incessant lies and distortion coming from the Left these days is a challenge. There is little common ground any longer when the opposing faction is intent only on destroying its political adversaries in the naked pursuit of greater power, NOT solving the ever-present problems of American lives.

Congressman Dan Crenshaw’s articulate, winning style and substance is a welcome presence in the fight to solidify the Trump (Conservative) agenda of economic prosperity, free markets, national security, the defense from American enemies without and within. Sadly, the latter has come to include almost the entire Democratic Party with its overwhelmingly Socialist/Marxist drift and the inevitable, desperate, mendacious fanaticism that must accompany the proposed Obamanist “transformation” set in motion in 2008.

Crenshaw brings character, personal attractiveness, the visible mark of his genuine heroism and sacrifice to the fight, not to mention a refreshing sense of humor and resilience in handling the ruthlessness of the MSM and the entire Dem Party juggernaut out for blood.

Following his Twitter account: public spirited advocate for people in trouble, a force in Congress for REAL healthcare insurance reform, friend of Israel, foe of socialism/communism, calling out the liars and dissemblers on all fronts. Someone enlivening the present and offering legitimate hope for the future.