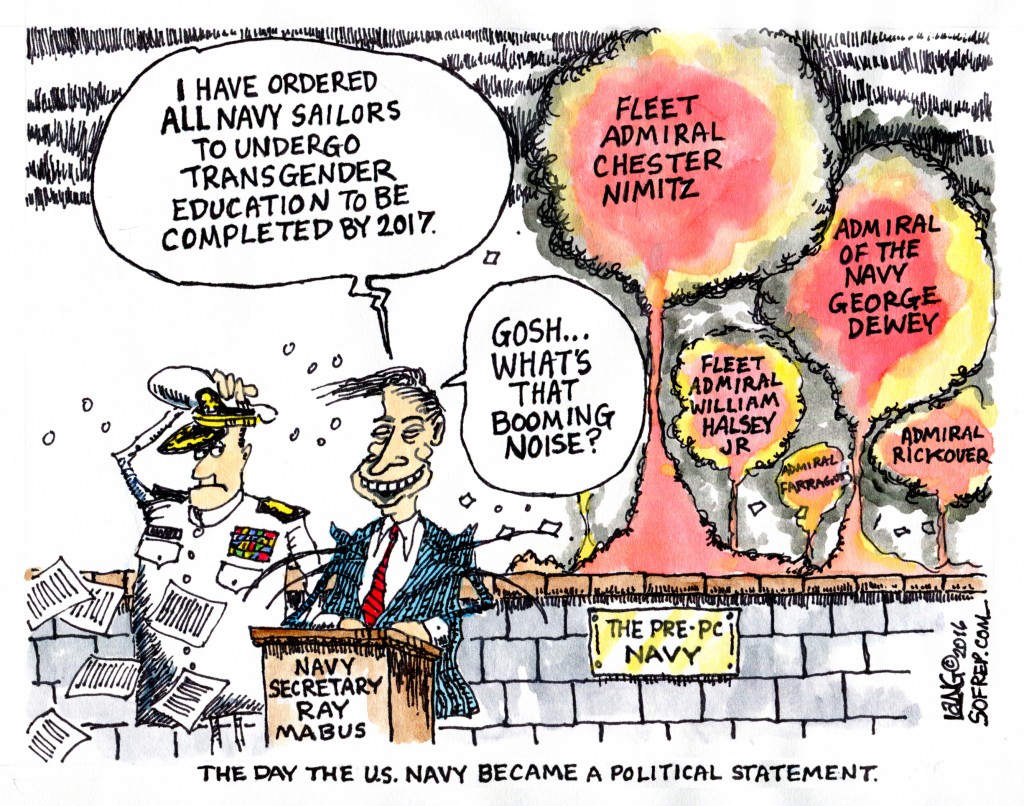 The recent controversy over Western values invoked by President Trump is basically another skirmish in the ongoing war between the individual and the collective. Those champions of Identity Politics and hallowed Victimhood as the highest virtue have no use for those millions of individuals content to be different and tolerated or just left alone. Everyone and everything is greedy grist for their Progressive, monolithic millgrinder. There is a mania in them to take over and control, especially those conventions and institutions the Left has previously viewed with hostility. Revenge and subversion drive every one of these assaults on American norms  and traditions.

Special Alert: The military is, unlike civilian life, a place where individualism has no place.  The armed forces are in the business of waging war as a single, unified force. By necessity, there is a rigid chain of command. Disobey and one is court martialed. It is not a place for “safe spaces” or working out personal problems. Nor is the Pentagon interested in underwriting personal, elective medical and psychological expense. It has brutal, bloody battles to face, and there is no room for distraction or ambiguity. Ask Jamie Shupe, a transgender retired from the military.

For these obvious reasons has  it  not always been the routine practice to reject applicants or draftees on the basis of medical or psychological risk? Remember flat feet? Bad eyes? Being too short? Being too tall? Likewise, does everyone- male or female, tall or short, graceful or klutzy-have “the right” to be a Rockette at Radio City?

The most curious question posed is why nowadays the Left is demanding access to and control of some of the very things it most passionately rejected in the good old Sixties days: things like the loathsome military and legal marriage! Think back a decade or four about the stance of these same people toward being drafted and being compelled by convention to wed in those days when the military was branded the most evil force on earth and marriage an antiquated, puritanical imposition on people wishing to cohabit without that contemptible piece of paper. Likewise, how curious to hear the very same people proudly announce what a horrible country this is while in the next breath passionately demanding Open Borders! for everyone and anyone. American citizenship: which is it, a privilege or just another entitlement and pathway to the Dem Party feeding trough?

Has it come down to the money, the financial benefits, the guaranteed access to public funds and entitlements? Now that there is no draft, and virtually anything goes with regard to life style or choice in one’s private dealings, why does the Left insist on “the right” to join the military and anyone (or two or three or more) being legally married?

Overriding even the financial perks, it all comes down to the perverse desire to control and re-shape long-standing norms and traditions to their own Progressive image. Or just shatter them. Obama made no secret of calling it Transformation. Blur all lines, sow confusion, seize power amidst the chaos. What else is the Left about other than Power and Control?

One Reply to “Remember the good old days when no one on the Left wanted to go into the military or get married?”