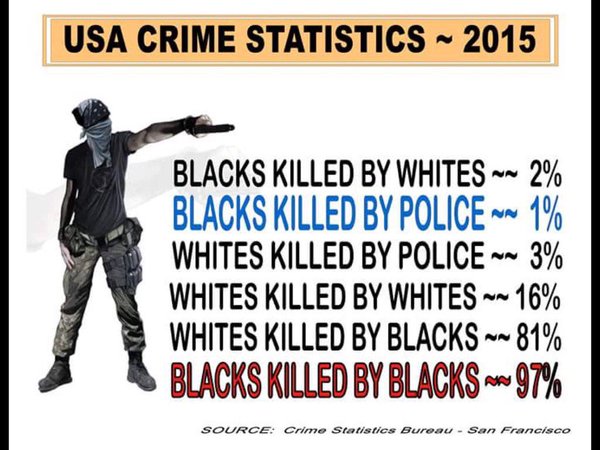 When it comes to racial issues, today’s Democratic Party rank-and-file has no interest in solving problems but rather revels in creating new crises and perpetuating those that exist. Black Lives Matter has come into being specifically to fan the flames of a desired all-out race war. Aided and abetted by the likes of Obama, Hillary Clinton and George Soros, the myth of widespread, deliberate police brutality against Blacks has been spreading like the plague. The fact that crime in America is overwhelmingly, statistically a Black problem is ignored. As is the fact that those most victimized by Black crime are other Blacks. No matter.

The police brutality narrative has long been used by hardened psychopaths like the Black Panthers in the 60s & 70s to rationalize criminal behavior as “political,” their so-called noble ends justifying any vicious means.  It was assumed that all that had gone by the wayside, especially with the election of the first “post-racial” President. Turns out things were just about to heat up again, only hotter this time. The rebirth of violent race relations began in earnest soon into the Obama Era with the blown-up case of Harvard snippy snot Louis Gates breaking into his own Cambridge MA house and being questioned about it by a White police officer doing his job to protect Gates’ property. Knowing nothing of the circumstances and most likely channeling his second-nature, inner Community Agitator, Obama blithely declared to the whole world that the officer “acted stupidly.” Never mind that Gates was the arrogant culprit creating a scene leading to his own arrest.

The message thereby went out from the most influential figure on earth that the police are not merely stupid but The Enemy, that every Black vs. police encounter is a case of “systemic racism.” We can thank this poisonous, false narrative emanating from the Democratic Party’s most prominent figure for today’s volatile state of race relations: most notoriously, the Trayvon Martin case, Ferguson and Michael Brown, Baltimore and Freddy Gray, Charlotte and Keith Lamont Scott.

Martin was proven to be one of the millions of impressionable young Blacks living out the vile way of life glamorized in “gangsta rap” videos pushed like heroin to the young by multimillionaire media moguls (and Obama cronies) like Russell Simmons. Subsequent investigations by the blatantly biased Obama/Holder DOJ into Ferguson and Baltimore determined that the police had not acted inappropriately. Cursory investigation into the Charlotte incident has shown in the days since that the perpetrator was armed and a wife beater. Hardly the narrative of innocent Blacks going about their business preyed upon by predatory cops.

Obama’s “post-racial” presidency has gifted thousands of law-abiding Black Inner City dwellers with the privilege of seeing their neighborhoods and businesses trashed and burned by their own. Chicago’s South Side boasts the reputation of being America’s premier murder capital. Armchair Useful Idiots in Palo Alto, Cambridge, the Upper East Side and Starbucks everywhere wring their hands, scream for more gun laws, ignoring the fact that that (to restate the obvious again) nearly all crime, murder specifically, against Blacks is by other Blacks, not Whites, not the police. Facing that fact alone would force serious examination of how and why our Inner Cities have become stagnant morasses of despair. The how and why is the Democratic Party welfare policies of the last 50 years that have set the stage for every riot site and, ominously, all those inevitably yet to come.

Apparently, it’s not the thousands of snuffed-out Black Lives that matter. It’s most definitely not seriously addressing genuine abuses by the police. Those relatively few incidents of police malfeasance, compared with the overwhelming number of Black-on-Black or Black on White crimes, present an opportunity to advance the Progressive goal of a lawless society, a banana republic run by a few gangsters. Electing career criminals above the law like the Obamas and Clintons promises a permanent underclass and a chaotic social order benefitting only these political scoundrels and their corporate cronies at the top. Meanwhile,  the rest of us are left to scramble on a daily basis for safety and security.