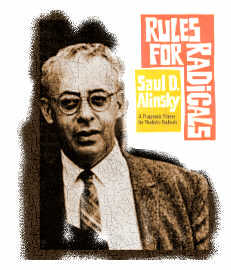 Our President’s shamelessly radical, subversive roots, laid bare for all to see.  Alinsky’s radicalism absorbed & embraced by Obama is not idealism or justice for the poor. It is intimidation in service to acquiring power for the very few, using (pick one) The Poor, The Victimized, The Oppressed, The Outsiders, The Dying Planet, The Good Cause as The Front. Preserving freedom and opportunity for all runs counter to the ambitions of a Saul Alinsky or Barack Obama. What good are millions of self-sufficient, industrious, proud people to an Alinsky or Obama who thrive on the weak and dependent?

The first part of Breitbart’s last project at his BigGovernment.com.

Read more on Stanley Kurtz’s “Radical-in-Chief” both here and here.

Current event, March 2012: Alinsky tactics effectively used against Limbaugh and all White Republican Men as the enemies of women.

One Reply to “The Vetting, Part I:
Barack’s Love Song To Alinsky”