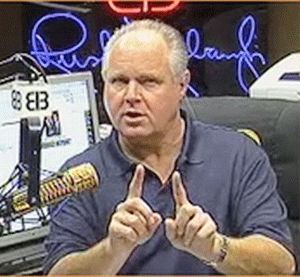 Read Jeffrey Lord at American Spectator on the Limbaugh boycott which includes such heretofore distinguished sponsors as Carbonite. As chance has it, this writer was on the verge of subscribing. The seven advertisers thus far hoping for an invitation to “The View,” free advertising in the NY Times and perhaps a Distinguished Service Medal from the White House are Quicken Loans,  Sleep Train, Sleep Number, Citrix Systems Inc., LegalZoom, ProFlowers, and Carbonite.

Here’s a note sent this morning from these quarters. What cowards, what hypocrites, what deep rot at the core of it all:

“I am just at the end of my trial subscription to Carbonite and was about to subscribe until the company took the cowardly step of joining the Rush Limbaugh boycott. If your company’s CEO caves so easily to the prevailing PC fashion to expand government interference in our lives, how can he and his company be trusted to guard my private files? I will find some other competing company to provide this vital service for me. This is still America, and there is still room for choice. Mr. Friend’s craven position only contributes to the removal of choice from all of our lives, including his own. Please remove all my files from your database and send me written verification that this has been accomplished.”

Nothing particularly daring on a Breitbartian scale in this, but it beats giving money to businesses eager to curry favor with Those Who Would Rule Us.

For the record at CNSNews: it’s not about some unbearable financial burden on (not-so) poor students. Try your local Target or Walmart. It’s yet another demand to have everything provided for you by your fellow citizens, on demand. Entitlement is the word.

And, at Mediaite, Sarah Palin cheerfully suggests President Obama might return the $1 million donation to his SuperPAC made by Eloquent Friend To Females Everywhere Bill Maher…thinking of his daughters of course.

To a resounding background sound of rank hypocrisy and  smirking silence from the Left,  Michelle Malkin writes prolifically at Townhall.com of 1001 verbal assaults on Conservative women  from prominent media Obamanites as she waits for apologies and her special consolation call from the White House.

The anything-but-unrelated phenomenon of Breitbart Is Here, nicely laid out by J.R. Dunn at American Thinker. Breitbart & Rush provide the two most visible, aggressive faces of American Conservatism. Their passion and integrity are the beacons of this war.  Small wonder both remain, in life and death, the prime crosshaired targets of the Left.

4 Replies to “A Nation of Breitbarts Rallies for Rush”