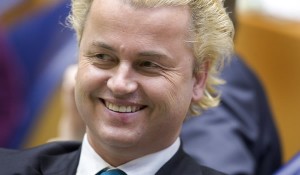 UPDATE 12/10/16: Now convicted by a Dutch court of “hate speech” for-what else-Islam’s intention to destroy us, Gilders remains a model of steadfast courage in the …

Europe’s leaders have realized, and are acknowledging one after another, that that continent’s multiculturalist policy–the idea that geographic areas could be ceded to immigrants from Islamic countries who would treat them as Islamic enclaves, rather than being encouraged to assimilate–has been a disastrous failure.

The Muslim Brotherhood has taken a greater role in organizing the protest against the Egyptian regime as it unfolds its independent political agenda.

Rashad al-Bayumi, the Brotherhood`s second-in-command, announced in an interview with Japanese TV that the group would join a transitional government in order to cancel the peace treaty between Egypt and Israel, as it “offends the Arabs` dignity and destroys the interests of Egypt and other Arab states.” He further stressed that Egypt does not need American aid.

In 1985, as a teenager in Kenya, I was an adamant member of the Muslim Brotherhood. Seventeen years later, in 2002, I took part in a political campaign to win votes for the conservative party in the Netherlands.

Those two experiences gave me some insights that I think are relevant to the current crisis in Egypt. They lead me to believe it is highly likely but not inevitable that the Muslim Brotherhood will win the elections to be held in Egypt this coming September.