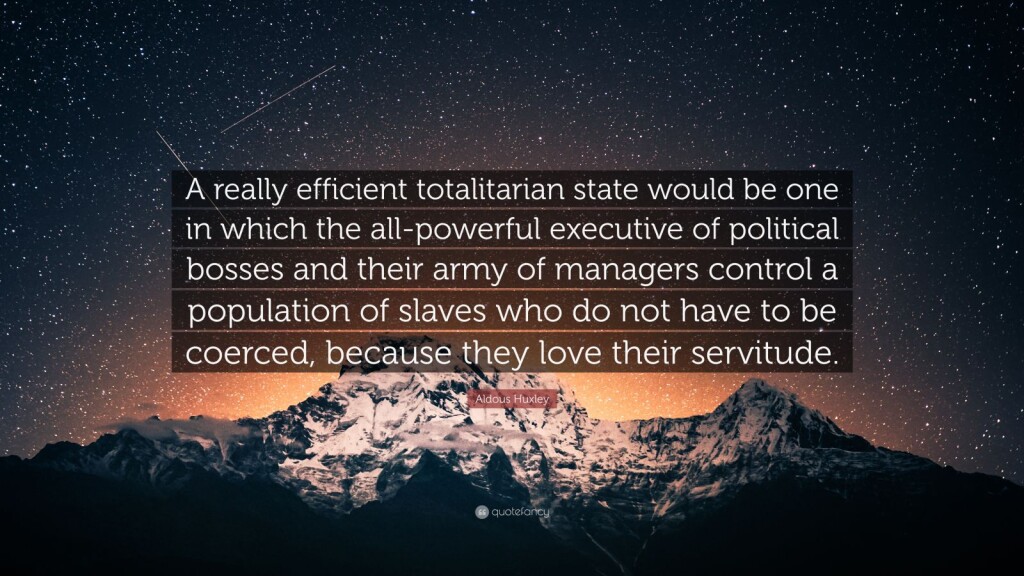 UPDATE 10/6/20: In response to those on the infantilized SafeNewWorld Left who love their chains and wish them on the rest of us, Trump’s simple message from his Covid experience is a simple nose thumb and a model for real adults. Get on with it, live your lives in liberty, pursue your happiness, whatever the obstacles posed. To those Americans who can’t relate, “you [paraphrasing Sleepy Joe] ain’t Americans,” just legal occupants of this free nation wasting the greatest blessing life has to offer.

ORIGINAL POST 9/27/20: It’s hardly an original notion that the catastrophic CoronaCrazed! shutdown of the world has really been a trial run for totalitarianism. On the basis of advice from purported “experts,” tens, probably hundreds of millions, perhaps billions of lives have been upended worldwide in one way or other. The bizarre irony is an old story: all this suffering has been (and continues to be) effected  in the worthy name of “safety,” this time from a nasty virus that has proven to be yet one more epidemic that has come through, done its severe damage to the vulnerable (the elderly, those already ill) and then subsided.

Unprecedented here in the history of mass medical emergencies is the price the overwhelmingly healthy majority of the world has been forced by government to suffer for a fraction-of-a-fraction of a percent minority consisting of those unfortunates seriously affected. Some people have become ill, some have died. Is that news and cause for panic? Tend to and protect those affected so that the rest of the well and living can go on. So goes the world, what America has been…until this strange, chilling moment when we have seen too many of the American populace behave as if these lockdowns and punishable violations are something they want to keep, to embrace with a fanatic, self-righteous gusto.

The economic freeze has brought us to the brink of another Great Depression, fertile soil in which totalitarian dictatorship is best implemented. But scarier still is that we have seen that mass economic deprivation or brute force detailed by Orwell are not necessarily the most efficient approaches to mass control. Our politics is breaking down along the lines of those still in love with liberty and those timid folk now in love with their masks and the mass dehumanization they represent. These  deluded souls are more than happy to vote for candidates who promise to make mask-wearing and other arbitrary federal mandaters The New Normal.  Apparently, millions now live in hopes of a SAFE NEW WORLD, one vast Safe Space, a variation on Huxley’s “Brave New World” with masks, social distancing, empty streets, abandoned businesses, endless good-intentioned, well-rationalized government edicts their comforting doses of soma, the chains they’ve come to love.

“Share The Misery” is the sweet siren song of the mindless masses of Marxist Utopians, but this time, let’s all do it together, for a SAFE NEW WORLD. And there’s always the  phony melting planet scenario to take its place when this one proves less than palatable to the commonsensical and sane amongst us. Old manure, new bags. Our response: MAGA!