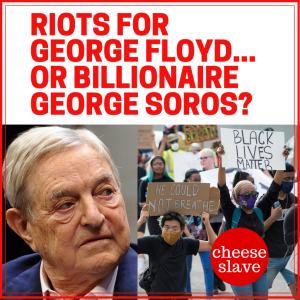 UPDATE 9/23/20: In case the nice folks over at Fox wonder why George Soros is “a person of interest” in the Left’s ongoing attempt to permanently transform America into Venezuela, check out the snakey recipients of his largesse.

UPDATE 9/22/20: The mystery deepens regarding Fox and its clear avoidance of the Soros’ subject. Now they (or someone in social media) are editing any discussion of him, even in Tucker Carlson’s commentary. Spooky, like George himself. Has this ghoul bought off Fox News too?

ORIGINAL POST 9/20/20: Newt Gingrich found himself shut up and shut down last week by Fox News weasels, uncomfortable with the subject of George Soros and his pivotal role in financing the ongoing domestic terror and general destabilization of the country. It would be considered equally imprudent by Leftists to bring up the subject of George Floyd and how he REALLY died.

Without these two Georges and the false narrative crafted by one and about the other, the Dem Left would find itself bereft of the a)major funding for their violent revolution and b)the Big Lie propaganda needed to fire up the mass hysteria driving such an insurrection.

5 Replies to “The Verboten Georges”