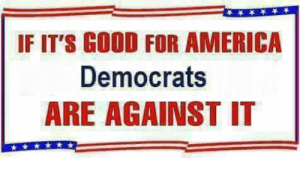 UPDATE 10/14/20: Conservatives know what they’re for, in fair weather and especially in foul. Let’s start with America herself and the freedom of the individual she embodies…

I don’t know what they have to say. It makes no difference anyway.

Whatever it is, I’m against it!

No matter what it is, Or who commenced it. I’m against it! 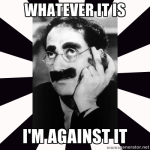 Your proposition may be good. But let’s have one thing understood.

Whatever it is, I’m against it!

And even when you’ve changed it, Or condensed it. I’m against it!

For months before my son was born I used to yell from night to morn.

And I’ve kept yelling Since I first commenced it. “I’m against it!”

Trump: Limit travel from China now that there appears to be an infectious virus coming from there.

Dem response: I’m against it! (“Blood on your hands! Murderer!”)

Trump: brokering peace in the Middle East between Israel and its UAE neighbors, dooming the phony “Palestine” Mafia to permanent irrelevance.

Dem response: I’m against it! (“It’s an accident. “Nothing to see here. Just ignore it.”)

Trump nominated for a Nobel Prize for actual success in negotiating peace in the Middle East.

Trump: possible solutions to the virus such as HCQ or a vaccine.

Yo! Dems! WHAT are you for? We know what or whom you’re against, and that’s anyone or anything associated with Donald Trump. Our political foes are enraged, unaccustomed to being repeatedly thwarted in their evil designs. Orange Man Bad just refuses to be intimidated in pursuit of preserving our free way of life. Although America is bigger than any single personality, we find ourselves continuously refreshed by this “polarizing” force, well on the way to being possibly the most consequential leader of our lifetimes. Enough of “reaching across the aisle” and “coming to a consensus” which means doing things their way. We know what we’re for, and he does too.